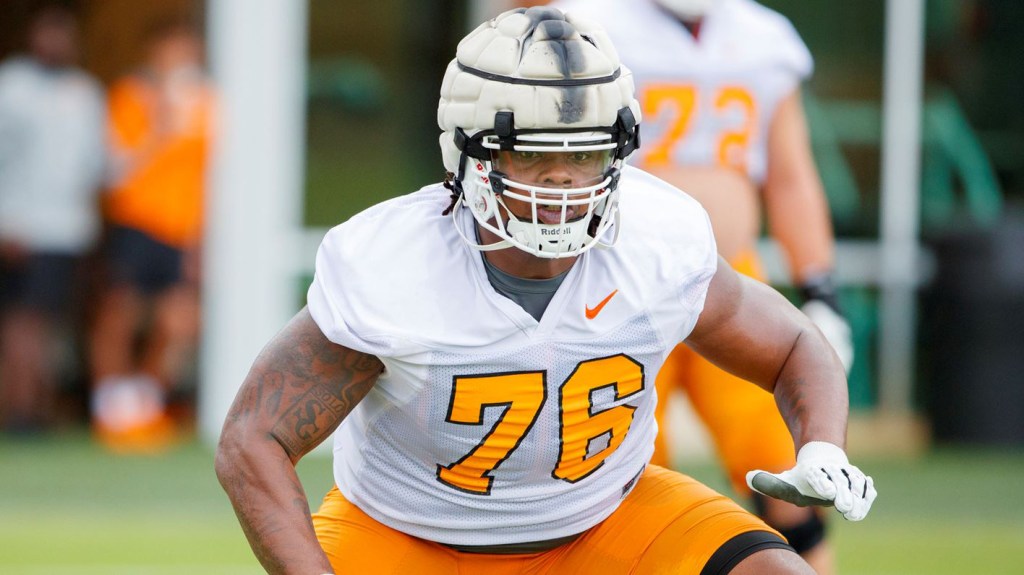 Tennessee football wrapped up its first week of fall camp on Thursday morning at Haslam Field with lots of optimism surrounding its experienced and strengthened offensive line.

With four of the five starting linemen returning from a year ago, the unit is making progress by leaps and bounds. After learning the system, and the tempo, of the offense last year, the men in the trenches are progressing greatly with a year under their belts.

“Progressing fast, this time last year, it’s night and day,” redshirt-junior Dayne Davis said. “Getting more guys in the room up there, getting in the playbook more, knowing their stuff. That way, ball, snap, quick got to know what you’re doing. Defense is going to change right before the snap. Knowing the inside and out of that playbook. I just feel like our O-line group is really tight. I think we’re with each other. Sometimes we battle back and forth but competition is good for the room, and we’ve got a lot of that right now.”

“Once you get used to something, it becomes natural to you,” junior Javontez Spraggins said. “Since last year, the offense has been fast. It’s been fast this year. It’s always going to be fast. We have figured it out, and now we have to run with it. Play ball now.”

The offensive line added a pair of highly-touted newcomers that enrolled early and went through spring practices in Addison Nichols and Brian Grant. This allowed both freshmen to not only to learn the system, but develop both physically and mentally.

With such a deep group, the expectations of offensive line coach Glen Elarbee have grown, and he has seen a response from his group. Accountability and leadership from all corners of the meeting rooms is just an example of the steps the guys are taking to grow.

“If you make a silly mistake, that can’t be us—can’t be what we’re about,” Elarbee said. “They all know better, man. They get in the meeting room it sounds like a freaking chorus or something, like the answers of the questions and everybody saying the same word.”

The growth seen by the offensive line has come from more places than just the football field. Cooper Mays is primed to step into the leadership role left by his brother, Cade, thanks largely in part to his experiences with the VOLeaders Academy summer immersion experience in Rwanda.

“Something that I took with me is servant leadership,” Mays said. “They talked about something called ‘leading from the bench.’ Whether you’re the star player, the worst player, in the middle or hurt, it doesn’t really matter where you are. You can always make a difference no matter where you’re at.”