Five things to know about UT after win over Ball State 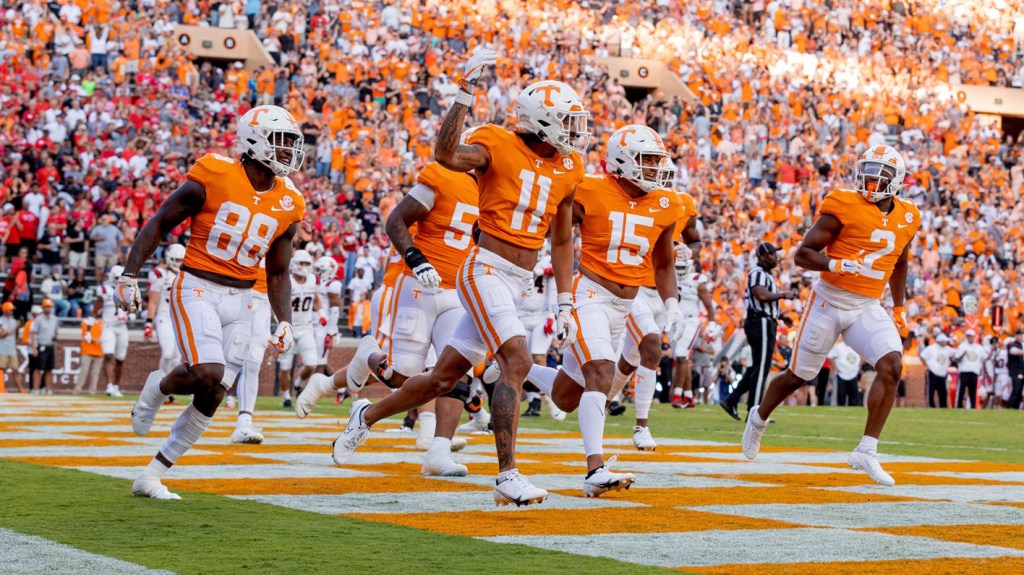 Tennessee football kicked off the 2022 campaign in front 92,236 fans Thursday night at Neyland Stadium, taking down the Ball State Cardinals in a zealous 59-10 victory. Here are five things to know from the season-opening win:

Known for its fast-paced, electric offense, the Tennessee Vols picked up right where they left off from last season. It took 23 seconds for the Vols to make it on the scoreboard despite not receiving the ball on the opening kickoff. The first two plays of the game consisted of an interception at the 28-yard line by Tamarion McDonald, his second career interception, and a completed 23-yard touchdown pass from quarterback Hendon Hooker to wide receiver Jalin Hyatt. The Big Orange scoring attack was just getting started, as seven different Vols scored touchdowns and helped the team total more than 500 yards of offense in the 59-10 victory.

With 59 points Thursday night, the Vols have scored 45 or more points in four consecutive games—tying a school record set during the final four games of the 1993 regular season. The Vols led 38-0 by the end of the first half, and the scoring continued for Tennessee until early in the fourth quarter, finishing the night with five rushing touchdowns and three passing. UT finished last season with the No. 7 scoring offense in the nation, averaging 39.31 points per game.

Following a breakout season in 2021, Hendon Hooker took the field by storm to open his second year on Rocky Top. After a quick touchdown strike 23 seconds into the game, Hooker delivered his second scoring toss late in the second period with a 16-yard pass to Walker Merrill, which moved him into the top 10 for touchdown passes in Tennessee history at 33, surpassing Tee Martin and Bobby Scott (32).

Finishing with two scoring passes in the contest, Hooker moved into a tie for second in program history for most consecutive games with a touchdown pass with 13, equaling Tony Robinson’s mark set in 1984-85. Hooker was also successful on the ground, rushing for a pair of scores for the first time in his Tennessee career. In total, he accumulated 233 total yards, four total touchdowns and completed 72 percent of his passes. The performance was another great effort by Hooker, who is expected to be in contention for the Davey O’Brien Award and Maxwell Award.

3. First trip to the checkerboards

Three Vols scored the first touchdown of their respective careers Thursday night. Wide receiver Jimmy Holiday hauled in Tennessee’s longest reception of the day, a strike from Joe Milton III for 53 yards early in the fourth quarter. The play marked both his first career touchdown and the longest reception of his collegiate career. Holiday finished the evening with the second-most receiving yards (62) on the team. Fellow receiver Walker Merrill grabbed the first score of his career after beating man-to-man coverage to streak across the end zone wide open for a 16-yard reception from Hooker. Making his collegiate debut, freshman running back Dylan Sampson capped off a 13-play, 78-yard drive in the third quarter with his first rushing touchdown on a two-yard carry up the middle.

Ball State’s offensive struggle showcased Tennessee’s defensive progression and growth. The Vols forced three total turnovers on Thursday, marking the fifth game during the Heupel era in which Tennessee forced multiple turnovers. In addition to McDonald’s interception on the first play of the game, Kamal Hadden nabbed UT’s second interception with 4:19 remaining in the second quarter. It marked Hadden’s second consecutive game with an interception after he recorded his first career pick during last year’s season finale against Purdue. Defensive backs Warren Burrell and Christian Charles each finished with eight total tackles to lead the team along with linebacker Aaron Beasley. Defensive lineman Omari Thomas returns in his junior year with energy, finishing with four total tackles and one pass breakup. Thomas, who is expected to be a key piece in holding down the defensive line, led a group that held Ball State to just 74 yards on the ground behind 27 carries. The Cardinals scored early in the second half after being shutout prior to halftime, but the Vols held them to seven points until a 25-yard field goal with three minutes left to play gave them 10 for the game.

Junior transfer receiver Bru McCoy made his first appearance in Neyland Stadium, where he recorded three receptions for 42 total yards while getting the start. Sophomore offensive lineman Gerald Mincey earned his first career start by taking the left tackle spot. In Dylan Sampson’s collegiate debut, he also recorded his first collegiate touchdown, rushing for 32 yards. Seventeen freshmen made their collegiate debut, and eight non-freshmen played their first game for Tennessee.

With a win, Tennessee is 1-0 going into week two. Next Saturday, the Vols will head to Acrisure Stadium to face the Pittsburgh Panthers in the second edition of the Johnny Majors Classic. Kickoff is set for 3:30 p.m. and will be televised on ABC.