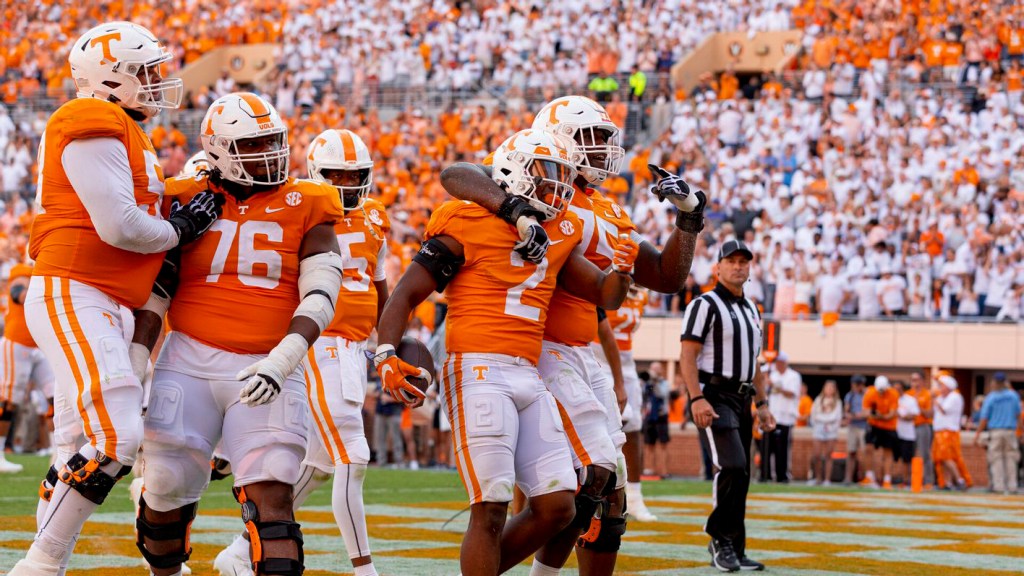 Running back Jabari Small (2) celebrates a touchdown with the Tennessee offensive line during the Vols’ win Saturday over Florida. UT Athletics photo by Andrew Ferguson

Kamal Hadden’s game-ending interception preserved a hard-earned, 38-33 victory for Tennessee over Florida on Saturday in front of a sell-out crowd of 101,915 at Neyland Stadium.

The Gators executed an onside kick after scoring a late touchdown, recovered at their own 47 with 16 seconds left and quickly moved to the UT 37. With seven seconds remaining and quarterback Anthony Richardson looking toward the end zone, defensive end Byron Young pressured him into an errant pass attempt that fell into the awaiting hands of Hadden as the clock expired.

Tennessee, which is ranked No. 8 in the latest Associated Press Top 25 poll and ninth in the USA Today Coaches poll, opened a season 4-0 for the first time since 2016 and stands at 1-0 in SEC play. The Gators, meanwhile, dropped to 2-2 overall and 0-2 in the league.

Quarterback Hendon Hooker completed 22 of 28 passes for a season-high 349 yards and two touchdowns and ran for 112 yards on 13 carries for another score. It marked the fifth game of Hooker’s career with 300-plus passing yards and the third with 100-plus rushing yards. His 461 total yards were a career best, and he ran his total of TD passes as a Vol to 39 with only three interceptions.

With a one-yard touchdown pass to wide receiver Bru McCoy in the second quarter, Hooker also extended his streak of consecutive games with a TD toss to 16. Hooker is chasing Heath Shuler’s program record of 18 consecutive games with a TD pass during a stretch from 1992-94. McCoy, meanwhile, finished the night with five catches for a career-best 102 yards and a touchdown.

After holding Florida scoreless on its first two drives of the game and moving the ball well on its own initial pair of possessions, Tennessee produced points on its second offensive series. Hooker marched the Vols 51 yards in 11 plays, including passes of 16 and 17 yards to Small and senior wideout Ramel Keyton, respectively. Those efforts helped set UT up for a 32-yard field goal by redshirt-senior Chase McGrath and a 3-0 lead with 1:11 remaining in the first quarter.

The Gators responded on their next possession. After Richardson converted a fourth-and-one to tight end Dante Zanders, he found fellow tight end Keon Zipperer for a 44-yard trip to the end zone. Adam Mihalek drilled the point-after attempt to put UF on top, 7-3, with 12:41 to go in the second stanza.

It took the Vols only 42 seconds to strike back and retake the lead. After opening the ensuing possession with a 70-yard strike to a streaking McCoy, Hooker danced into the end zone himself two plays later from four yards out. McGrath’s PAT made it 10-7 Tennessee with 11:59 to go in the second period.

Florida answered three-and-half minutes later, with Richardson capping an eight-play, 75-yard drive with a seven-yard keeper around right end. Mihalek booted the extra point to make it 14-10 Gators with 8:28 remaining in the first half.

With 2:50 to go before intermission, a 49-yard punt by UF’s Jeremy Crawshaw pinned Tennessee at its own one and made the chances for points before the half seem rather unlikely. The Vols, however, got a first down and then faced a third-and-10 at their own 12 that Hooker converted with a 10-yard pass to tight end Princeton Fant.

On the next play, Hooker connected with a diving Keyton for a 43-yard gain to set Tennessee up at the Florida 35. From there it took seven plays, including a 16-yard scramble by Hooker, before the Vol signal-caller located McCoy racing across the back of the end zone and delivered the ball for a one-yard score. McGrath’s PAT gave UT a 17-14 advantage with seven seconds remaining that it could carry into the locker room.

Tennessee got the ball first in the second half, and the Vols built their biggest lead of the game at that point by going 61 yards in 10 plays. Small had two key plays in that march, exploding for 39 yards off the right side on the second play and putting the finished touches on it by leaking out of the backfield and taking a pass from Hooker 16 yards into the north checkerboard. McGrath’s PAT pushed the Big Orange in front by 10, 24-14, with 12:08 to go in the third period.

Florida struck right back, covering 75 yards in 12 plays and converting a fourth-and two along the way before Richardson went airborne over the pile at the goal-line for a one-yard touchdown run. Mihalek’s extra point pulled the Gators within three, at 24-21, with 5:55 left in the third frame.

Following a 34-yard Jimmy Holiday kickoff return to the 38, the Vols needed only five plays to reset the lead to 10. A 44-yard carry by Hooker pushed him past 100 yards rushing on the day and gave UT a first down at the 18. Then Hooker hit Fant for a 16-yard pick-up to the two. After Small appeared to score from the one two plays later but was ruled short by the officials and the replay official, he burrowed in on the next snap. McGrath’s kick made the score 31-21 with 3:58 remaining in the third.

Tennessee’s defense thwarted a Florida scoring response with 12:34 left in the fourth quarter. With the Gators operating with a first and 10 at the UT 13, Vols junior defensive tackle Omari Thomas stripped Richardson on a quarterback keeper, and Banks recovered to end the possession.

The Big Orange offense properly acknowledged its stop-troops by turning the UF turnover into points. With a 45-yard pass play from Hooker to wide-open redshirt-senior tight end Jacob Warren igniting the drive on the first snap, the Vols covered 87 yards and hit pay-dirt on play 10 when Wright burst into the end zone on third-and-goal from the Gator five. McGrath’s PAT gave his team a 38-21 cushion with 7:55 to go in the contest.

Florida took the ball 75 yards in 10 plays on its next possession to make it an 11-point game. Running back Montrell Johnson Jr. carried the ball around the left end from five yards out, and a two-point conversion pass attempt fell incomplete to leave the Gators trailing, 38-27, with 4:49 left on the clock.

After Tennessee recovered the ensuing onside kick at its own 49, the Vol offense milked the clock down to 1:11 before turning it over on downs. Florida took advantage, scoring with 17 seconds left on a three-yard pass from Richardson to receiver Ricky Pearsall. Richardson’s two-point pass attempt was off target, leaving the score 38-33 Vols with 17 seconds remaining.

Florida attempted another onside kick, and this time the Gators recovered at their own 47 with 16 ticks left. Three plays later, however, Hadden eliminated the threat with a game-ending pick.

Tennessee is off Saturday, before traveling to Baton Rouge to face LSU on Oct. 8.