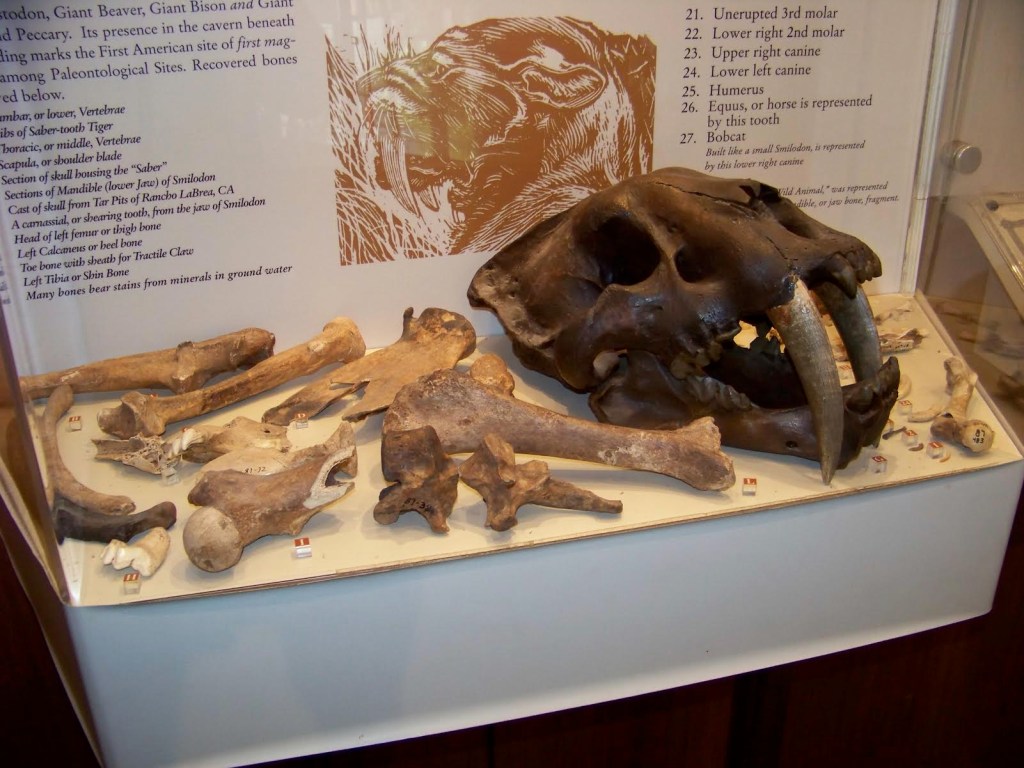 The display case in the lobby of Regions Bank. Photo submitted

Ahalf-century ago, a construction company unearthed the remains of a saber-toothed cat that had lived in present-day downtown Nashville 11,000 years ago.

A quarter century ago, that discovery resulted in the naming of a pro sports team. But about the same time, one of the prehistoric cat’s teeth turned up missing.

This strange story begins in August 1971. Workers were digging on the site of what is now known as the UBS Tower when they stumbled across some bones in an underground chasm.

The construction project was halted for a few weeks while scientists studied what they had found.

It turns out that downtown Nashville sits on a series of vertical caverns. And in the fall 1971, while the construction project was halted, archaeologists and paleontologists found about a thousand bones in this cavern. In one section, high up, they discovered human remains, which were later determined to be from the Woodland Era (about 1,000-3,000 years old). In another pit they discovered the bones of a saber-toothed cat, along with those of other pre-historic animals including elephants, horses and camels—all of which were known to roam Middle Tennessee at one time.

“We won’t know, and we will never know, why all these animal bones ended up in the same place,” Aaron Deter-Wolf of the Tennessee Division of Archaeology speculated in a recent talk to the Nashville History Club. “The animals may have died on the surface, and their bones later washed into the pit. Perhaps they fell in while alive and couldn’t escape.

“In the case of the saber-toothed cat, it may have been drawn in while following its prey, and also become trapped.”

We should credit both the Foster & Creighton Construction Co. and First American National Bank for halting the project in the first place, because there was (and still is) no law in Tennessee that prohibits an individual or company from digging through and discarding animal bones, no matter how old. In fact, First American was so proud of its actions that the bank put up a display in their bank lobby at 315 Deaderick St. featuring several of the bones and teeth that were discovered in the dig.

In 1997, Nashville’s expansion NHL team took suggestions on what its nickname would be. On the eve of announcing a decision, the Tennessean reported that the leading candidates for the nickname were the Fury, the Edge and the Ice Tigers. But then, at the last minute, team owner Craig Leipold chose to call the team the Predators, in a nod to the discovery of the saber-toothed cat’s bones 26 years earlier.

About two years later, Birmingham-based AmSouth Bank took over Nashville-based First American. At the time I was a business reporter, and I can tell you that this was a big corporate takeover with a profound effect on the Nashville psyche. First American was the last of the big Nashville banks, and a lot of people in Davidson County were very upset about its demise.

A few months after the takeover was announced, I got an anonymous tip that some of the prehistoric bones had been stolen from the display in the bank’s lobby in the transition from First American to AmSouth. I called the bank, and, sure enough, a tooth that had belonged to the saber-toothed cat was missing.

A quarter century has passed since the Nashville Predators got their name and since the saber-toothed cat’s tooth turned up missing.

An AmSouth spokesman said then that a person who is not an archaeologist or paleontologist would probably not be able to identify it. “You might think that it came out of a rottweiler’s mouth,” he said.