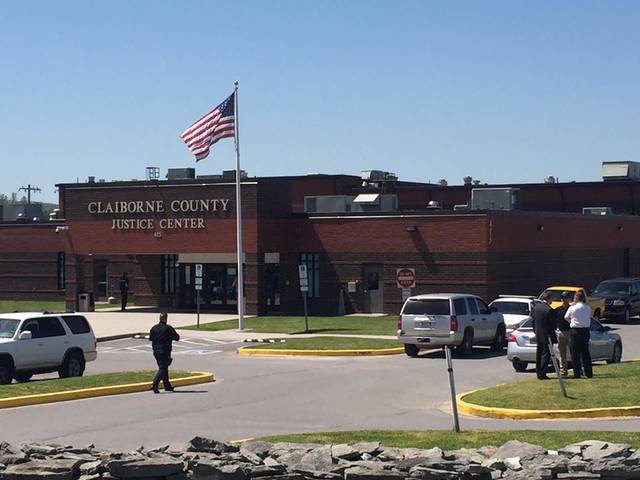 A federal lawsuit has been filed by the father of a deceased Claiborne County Jail inmate who died on Oct. 10, 2021 – less than five hours following his arrest. Joseph Lou Collins Burkhart, 26, was found unresponsive in his jail cell and eventually died from cardiopulmonary failure as a result of a drug overdose, according to the court document.

The civil suit brought by Joseph Collins claims that Burkhart was not taken to the nearest hospital, which would have been the Claiborne Medical Center in Tazewell, when he was clearly suffering the effects of a drug overdose.

One of the principal defendants in this case is New Tazewell police officer Russell Ruskowski. The officer arrested Burkhart after finding him unconscious at a local gas station, charging him with public intoxication. Two other defendants – John Doe 1 and John Doe 2 – are as yet unnamed but identified in the document as having conducted a brief medical screen following Burkhart’s arrival at the jail.

“Despite administering Naloxone, however, neither Defendant John Doe 1, nor John Doe 2, nor any other correctional officer or medical staff called 911 or otherwise sought emergency medical attention,” reads the lawsuit document, in part. “Furthermore, upon information and belief, either due to lack of training or indifference, Defendant John Doe 1, Defendant John 2, and other correctional officers failed to even place Burkhart under medical observation. Instead, Burkhart was housed in a shared cell and essentially left to ‘sleep off’ a medical emergency,” continues the document.

The city of New Tazewell and the county of Claiborne are also listed as defendants in the case. According to the lawsuit, the two entities are “liable” for inadequate training of officers handling cases where the arrestee is under the influence of narcotics. The lawsuit also claims that the two entities are liable for not providing adequate emergency medical care and attention.

The document claims the county in particular is liable for holding to an official policy or longstanding practice of denying appropriate medical attention to pretrial detainees and similarly situated persons.

According to the lawsuit, Officer Ruskowski was assisting another officer with a routine traffic stop at the Marathon Station in New Tazewell when he was approached by a citizen. That person was concerned about a man, now identified as Burkhart, who was unconscious and hanging out the window of his vehicle.

“…Ruszkowski knew Burkhart from prior law enforcement encounters and knew that Burkart had a history of drug abuse,” reads the court document.

According to the officer’s arrest report, Ruszkowski observed Burkhart “passed out with his head leaning in between his legs with the driver door open.” The report alleges it took multiple times to wake Burkhart before he came to. The report also states that Burkhart “smelled of alcohol and was unsteady on his feet.”

The lawsuit claims that police bodycam footage confirms that Burkhart was completely unconscious when Ruszkowski found him.

Once Ruszkowski was able to wake Burkhart, the officer repeatedly asked him what he had taken, expressing “disbelief in Burkhart’s earlier statement that he had had only two or three drinks,” according to the lawsuit.

“Throughout the hour-long encounter, including the drive to the Claiborne County Jail, video footage shows Burkhart acting erratically, falling in and out of consciousness, unable to keep his body upright, appearing limp, and exhibiting other obvious signs of a drug overdose requiring emergency medical attention… Ruszkowski failed, however, to call for emergency medical or transport to the hospital,” reads the document.

Instead, Burkhart was transported to jail and booked. The lawsuit claims that at no time was emergency medical assistance called.

“…defendant John Doe 1 and Defendant John Doe 2 conducted a brief medical screen of Burkhart, determined that he was most likely suffering from an opioid overdose, and, at some point not long after he arrived at the jail, administered Naloxone to Burkhart,” reads the document.

Naloxone, more commonly known as Narcan, is an opioid antagonist that is usually administered nasally and is designed to rapidly reverse opioid overdose.

The suit claims that other inmates tried “to no avail” to get help for Burkhart, who was last seen alive on Oct. 9 at 10:45 p.m. by a corrections officer while on break. According to the document, that officer recalled seeing Burkhart “moving.”

At 1:47 a.m. the next morning, Burkhart was found unresponsive by a different corrections officer. The inmate was officially pronounced dead at 4:39 a.m. by county coroner Dr. Carroll Rose. The pronouncement was made via a telephone call.

If successful, Collins stands to receive $1.5 million in compensatory damages, in addition to reasonable attorneys’ fees/costs and other expenses including medical and funeral ones.

Collins is also requesting that the case be tried by jury.

When reached for comment, Claiborne Sheriff Bob Brooks said he had yet to be officially notified of the lawsuit.

“The first I’d heard of it was when someone told me this morning (Oct. 13) about it being on your (the Claiborne Progress) website,” said Brooks.

As of press time, other principals in this case could not be reached for comment.

This is a developing story. The Claiborne Progress will have more as new information becomes available.