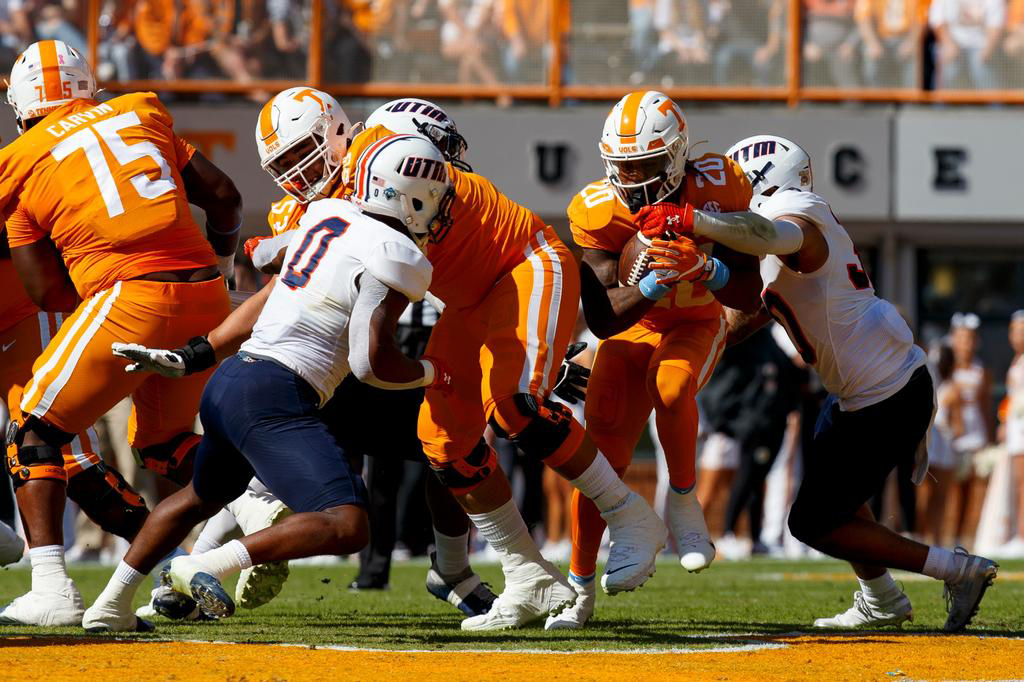 After scoring a program-record 52 points in the first half, the No. 3 Tennessee Volunteers cruised to a 65-24 win over UT Martin on Homecoming in front of a sold-out crowd of 101,915 in Neyland Stadium on Saturday.

The Vols (7-0, 3-0 SEC) amassed 696 yards of total offense—the second-most in program history—and scored nine touchdowns. Tennessee’s 65 points were the most since the Vols put up a modern-era, program-record 70 points against Louisiana Monroe on Sept. 23, 2000. It was the second time this season in which the Big Orange eclipsed the 60-point margin as well as the 600-yards of total offense mark.

Tennessee finished with 495 yards and five scores through the air, while adding 201 yards and four touchdowns on the ground. Six different Vols found the checkerboards against UT Martin (4-3).

Redshirt senior quarterback Hendon Hooker etched his name into the record books on a beautiful day on Rocky Top, as the Greensboro, North Carolina, native recorded a touchdown pass in his 19th straight game, setting a new program-record by passing VFL Heath Shuler’s previous record of 18 (1992-94). Hooker finished the day with 276 yards and three touchdowns on 18-of-24 passing. He added 28 yards on the ground for 304 total yards of offense. Redshirt senior Joe Milton III chipped in 135 yards and a scoring toss on 4-of-7 passing.

Reigning National Player of the Week Jalin Hyatt posted another big-time performance, hauling in seven catches for 174 yards and two touchdowns—highlighted by a 66-yard scoring reception late in the second quarter from Princeton Fant on a double-pass. The Biletnikoff Award candidate improved his nation-best marks in receiving touchdowns (12) and 40-plus yard receiving plays (8) on the day. He also recorded his third game with triple-digit receiving yards and has hauled in multiple touchdown passes in four different games this season.

Hyatt wasn’t the only receiver to eclipse the century mark on the day, as freshman Squirrel White finished with 122 yards and a touchdown on five receptions—all of which were career highs. White, who hauled in a 64-yard score from Milton in the fourth quarter for his first career touchdown, became the first Vol freshman receiver to eclipse the 100-yard mark since Marquez North on Oct. 19, 2013. Senior Ramel Keyton also brought in a career-best two scoring catches to go with 77 yards on five receptions.

Redshirt senior tight end Princeton Fant had a career day in multiple facets, accounting for a personal-best three touchdowns in the first half. The Nashville, Tennessee, native housed a pair of scores on the ground, coming from one-yard and 11-yards out, before throwing a 66-yard touchdown to Hyatt. Fant ended the day with 95 yards of combined offense (66 yards passing, 17 yards receiving, 12 yards rushing).

On the ground, freshman Dylan Sampson led the way with 62 yards and a score on 13 carries. Junior Jabari Small finished with 11 carries for 33 yards and a touchdown.

Defensively, Tennessee forced multiple turnovers for the fifth time this season, finishing with one interception and one fumble recovery, both of which turned into touchdowns on the offense end. The Big Orange defense did not allow a single third-down conversion in the first half, standing up the Skyhawks on all seven third down tries. UT Martin was just 3-of-13 on third down for the game and failed both of its fourth-down-conversion attempts.

Tennessee jumped out to an early 21-7 lead after the first quarter. A 44-yard reception by Hyatt from Hooker set up a 1-yard rush by Small for the Vols’ first score of the game. For the second week in a row, Fant plowed his way into the checkerboards from the fullback position, diving in from a yard out. Then, William Wright’s first-career interception halted the Skyhawk offense and was followed by an 8-yard connection from Hooker to Keyton on an slant route for the score.

The Big Orange quickly extended its lead by 10 more points less than five minutes into the second stanza thanks to a three-and-out and a turnover forced by the Tennessee defense. Redshirt senior Chase McGrath sailed one through the uprights with a 40-yard field goal. On the first play of the ensuing possession, senior Trevon Flowers forced a fumble that was recovered by senior Aaron Beasley. Hyatt found his way into the end zone for the first time in the game after taking a screen pass from Hooker 22 yards to the house to make it 31-7.

Firing on all cylinders on both sides of the ball, Tennessee extended its advantage to 52-7 at the end of the first half. Hooker added his third scoring toss of the game, and second to Keyton, on a 17-yard completion. Fant’s career day continued when he took a handoff 11 yards into the end zone for his second rushing touchdown of the day. The tight end then found Hyatt for a 66-yard scoring toss on a trick play to break the program record for points in a half.

The Vols cruised to their seventh victory of the season with a pair of scores in the second half. The Big Orange capped off a five-play, 75-yard drive out of the break with a touchdown rush by Sampson from one yard out. During the fourth quarter, Milton connected with White on a deep ball for a 64-yard score.

Tennessee is home again next week, as the Vols host No. 19/18 Kentucky for a 7 p.m. kickoff on ESPN.