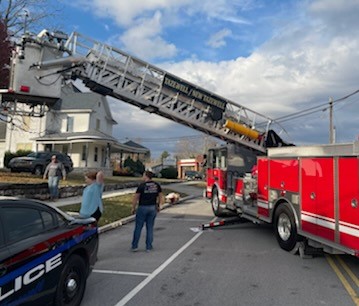 The newest acquisition for the Tazewell-New Tazewell Fire Department shines like the jewel she is. The refurbished 2002 SP70 Sutphen ladder truck has made her maiden run and by all reports is a beauty and a real asset to the station. Photo submitted

The refurbished 2002 Sutphen ladder truck made its maiden run to assist in the recent Masonic Lodge fire that brought the structure to ashes. Tazewell-New Tazewell Fire Chief Josh Miracle decided to try out the SP70 truck when he was called to help other area fire stations in extinguishing the blaze. Miracle and the new truck stayed behind to help “cleanup” the site once the fire was brought down.

The town of New Tazewell agreed to pay the eight percent matching portion to acquire the Community Development Block Grant (CDBG) that paid for the refurbished truck. It took some 26 months but, according to Miracle, ‘she is a beauty and a real asset to the station.’

Stiff competition during the application process prompted town government and the fire chief to try instead for a refurbished rather than a new truck, according to Miracle.

“Between COVID and everything, it’s been a long process, but we came out on the good side. It replaced our 1996 model ladder truck that had a lot of hours and miles on it. Had a lot of repair work that needed done,” said Miracle. “If you had to buy this truck (the SP70 Sutphen) new, it’s about $1.2 M plus depending on how much of the fancy stuff you want on it plus about another $200,000 in outfitting it with equipment.”

Miracle says a best estimate for the longevity of a refurbished model is about 15 years.

“They base that off of fire departments that run a lot. This truck will probably see about 300 calls a year. We’re not running it like other departments would. We see the truck lasting us about 20 years.”

Just some of the upgrades on the Sutphen include its water capacity of 500 gallons compared to just 250 on the older truck.

“We can run this like an engine. We don’t even have to use the aerial on it. This truck has a bucket with breathing air, so it makes it a lot safer for our guys. They can stand in the bucket and see what they’re doing. They have breathing air that runs from the truck to the bucket,” said Miracle. “The other truck was just a ‘stick’. It’s just an aerial, so you can’t really see what you’re spraying at if you’re 75 feet away – you’re at the turntable operating the truck.”

Prior to getting the new truck, the TNT firefighters were forced to navigate small spaces when hooking water supply lines directly from a hydrant to the pumper truck.

“We had to make sure we laid that line on one side of the street because, if we blocked the road, we couldn’t get our ladder truck in. This (new) truck, we can actually run first-due to a call. We don’t have to run an engine in front of it. We can run this truck then bring an engine behind it to back it up with extra equipment,” said Miracle.

The CDBG funds came to $456,500 including the eight percent match from the city. After fees, equipment, warranty and other administrative costs, the truck was bid and purchased for some $439,000.

“It saved the town, the fire department and the people of our county a lot of money by getting the grant. We foresee the truck lasting for 20 years or more. It’s definitely something that’s going to be a good asset for our area. The main thing is keeping the firefighters safe. It gives them a platform to work out of.

“We contemplated going after a 100 feet ladder truck but, the problem there is, we have to retrain everybody. We have small streets and once that truck is set in a roadway, you’re not going to get anything around it. It’s there and it’s in the way. We wanted to go after something a little smaller that would be more beneficial for us,” said Miracle.

The only thing the department loses in going a bit smaller is 25 feet in reach. Otherwise, the new truck is easier to back into tight spaces like a driveway and is more mobile, he said.