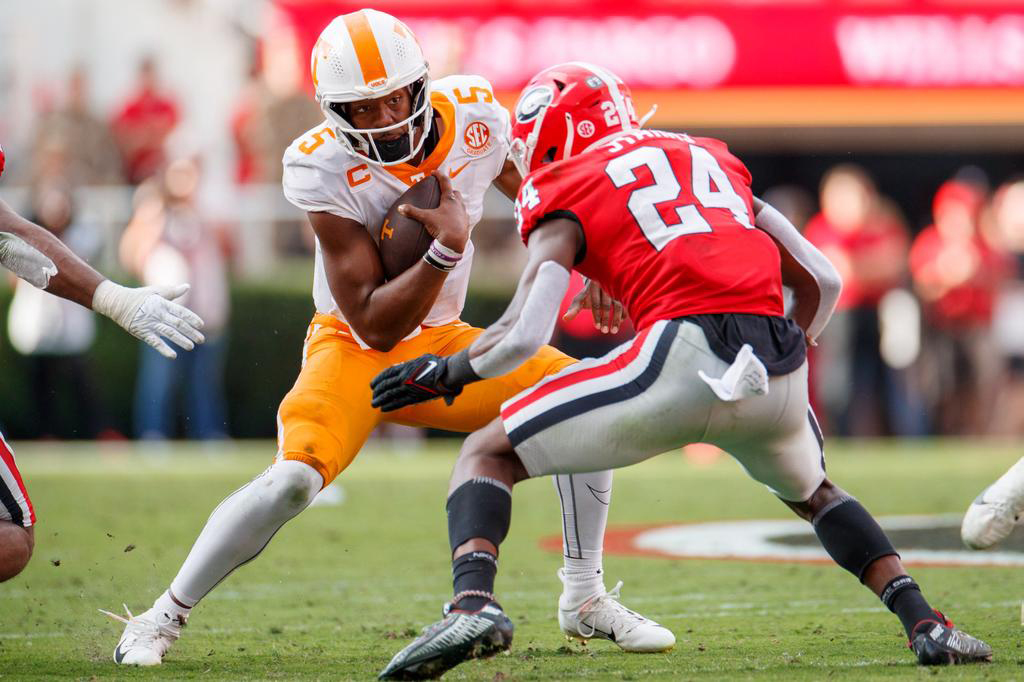 Tennessee’s eight-game winning streak was snapped Saturday at top-ranked Georgia, as the Bulldogs claimed a 27-13 triumph over the Volunteers.

The Vols (8-1, 4-1 SEC and No. 5 in the latest Associated Press poll) were limited to a season-low 13 points and 289 total yards against a Georgia unit that entered the weekend leading the Southeastern Conference in scoring defense and total defense, allowing just 10.5 points and 262.6 yards per game. Penalties and negative plays proved costly for Tennessee, which allowed a season-high six sacks and committed nine penalties for 55 yards.

Redshirt senior quarterback Hendon Hooker finished the game completing 23 of 33 passes for 195 yards with one interception, registering his fourth game this season with more than 20 completions. Redshirt senior wide receiver Cedric Tillman pulled in a game-high seven catches for 68 yards, while junior wideouts Jalin Hyatt and Bru McCoy each had six receptions for 63 and 38 yards, respectively.

Hooker’s school record streak of consecutive games with a touchdown pass ended at 20 games. During that stretch, Hooker passed for 52 touchdowns with three interceptions

Sophomore running back Jaylen Wright led the Vols, rushing 21 times for 69 yards and Tennessee’s lone touchdown. It was his 10th career score and sixth of the season as the Durham, North Carolina native eclipsed 500 rushing yards on the year.

The Volunteer defense collected a takeaway on the first drive of the game when redshirt senior defensive end LaTrell Bumphus punched the ball out from Georgia running back Daijun Edwards, recording his first career forced fumble on a six-yard tackle for loss. Starting STAR Tamarion McDonald pounced on the rolling pigskin to secure the turnover inside UGA territory at the 47-yard line.

Tennessee picked up three points off the turnover as redshirt senior placekicker Chase McGrath’s 47-yard try sailed through the uprights and put the Big Orange ahead 3-0 in the early going.

The Bulldogs responded with a quick five-play, 80-yard touchdown drive, sparked by a 52-yard deep ball to wideout Arian Smith—the longest passing play to a UGA wide receiver this season. Bennett capped the series with a 13-yard scramble to the pylon, giving Georgia a 7-3 lead with 8:32 remaining in the first quarter.

After pinning the Vols at their own one-yard line on a booming 75-yard punt and forcing a quick three-and-out, Georgia capitalized on short field position with a 37-yard passing connection from Bennett to McConkey. The wideout broke free on the right side and hauled in a wide-open score to provide a 14-3 cushion for the Bulldogs with 3:32 to go in the opening stanza.

Georgia piled on more points early in the second quarter, using a six-play, 64-yard touchdown drive to go up 21-3 with 14:17 left in the first half. The series was highlighted by running back Kenny McIntosh’s 49-yard grab on a wheel route and punctuated by a five-yard strike to Marcus Rosemy-Jacksaint, getting both his feet down in the back of the end zone to pull ahead by three scores.

Tennessee entered the red zone on the ensuing drive, but back-to-back false start penalties stalled the Big Orange into settling for a field goal. McGrath knocked through his second attempt of the afternoon, connecting from 36 yards to cut the deficit to 21-6 with 9:36 left in the second quarter.

Georgia added three points as time expired at halftime when Jack Podlesny stepped up and converted a 19-yard field goal, giving the Bulldogs a 24-6 edge as both teams headed into the locker room.

Long possessions for both sides melted nearly 14 minutes off the game clock in the third quarter before Podlesny tacked on three more with a 38-yard field goal, giving UGA a three-touchdown lead with 1:09 left in the third.

Tennessee’s first and only touchdown of the contest came with 4:15 remaining in the game as Wright rushed up the middle for a five-yard score, capping an eight-play, 61-yard series. The drive was kept alive when Hooker found Hyatt over the middle for a 28-yard gain on 4th-and-8 before the TD was punched in on the very next play. McGrath’s PAT made it 27-13 in favor of Georgia, which held for the game’s final score.

Tennessee returns home Saturday for its final home game of the season against the Missouri Tigers. Kickoff is set for noon.