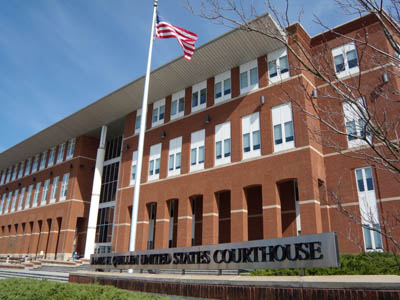 A federal judge for the U.S. District Court – Eastern District of Tennessee in Knoxville has dismissed a substantial portion of a civil suit brought by parents of a 14-year old claiming excessive force was used during a traffic stop.

The lawsuit claims the child’s civil rights were violated by Claiborne County Sheriff’s deputy Kenneth Ochoa and Tazewell Police officer Colby Werner. The document also claims liability by Claiborne Sheriff Bob Brooks, and TPD Chief Jeremy Myers for not properly training their officers in the use of due force. Claiborne County and the city of Tazewell were also listed as defendants.

The hearing netted the dismissal with prejudice of the portions of the lawsuit pertaining to Tazewell Mayor Bill Fannon, Chief Myers, Officer Werner and the city of Tazewell. By dismissing with prejudice, the judge has made it impossible to refile the case in any state or federal court. The ruling also wipes the slate clean for those dismissed by officially acknowledging no wrongdoing had been done to the child.

As of press time, the Claiborne Sheriff’s Department and its sued officer/officers are still on the hook as they await a ruling on their portion of the case.

The court document details the alleged events occurring during the overnight hours of Nov. 7-8, 2020.

“(The boy) and a friend decided to take (the boy’s) ATV down the road to a market for some snacks. A Claiborne County Sheriff’s deputy spotted them while out on patrol and attempted a traffic stop. (The boy), scared and trying to get back to his friend’s house, didn’t stop. A few minutes later, (the boy) was face-down in the dirt, his hands and arms pinned beneath him, being kneed in the back and punched in the head and face repeatedly by Claiborne County Deputy Kenneth Joseph Ochoa, Jr. (“Dep. Ochoa”) and kneed and kicked in the head and torso by Tazewell Officer Colby Werner (“Officer Werner”).”

“ 2. Dep. Ochoa – 35-years old and 235 pounds – even bragged on a body camera video about punching the 14-year old (boy), stating to his fellow deputies and officers, “I (expletive) clocked him right in his (expletive) face!”

“3. Knocked unconscious, suffering a concussion, facial trauma, a blow-out fracture of the left orbital wall, a bloody nose, radiating head and facial pain, and daily pounding headaches, the now 15-year old (boy) suffers from nightmares, insomnia, and is burdened with ongoing anxiety. As a result of the traumatic incident, (The boy) has been treated by a maxillofacial surgeon for the facial fractures, a child neurologist for the head trauma, an ear nose and throat doctor (“ENT”), also for the facial fractures, an ophthalmologist for vision problems due to the head injury and severe injury to his left eye, a dentist for teeth-grinding caused by the injury to his jaws, a therapist for PTSD, an occupational therapist, a physical therapist, and a speech therapist. (The boy’s) education was also significantly affected by the incident, as he had to (be) home-schooled after the incident, as the injuries he received not only caused PTSD, but also resulted in cognitive problems, including comprehension difficulties and short-term memory loss, and alteration of his curriculum.

“4. Defendants, acting under color of law, deprived (the boy) of his constitutional rights under the Fourth and Fourteenth Amendments and caused him injuries by violating state common law…” reads the document, in part.

According to the lawsuit, the boy did lead the officers on an extensive pursuit over multiple roads and through private properties prior to apprehension.

The initial lawsuit asks that $1 million in compensatory and $1.5 million in punitive damages, plus costs be awarded to the parents.

The Claiborne Progress will have more as new information becomes available.