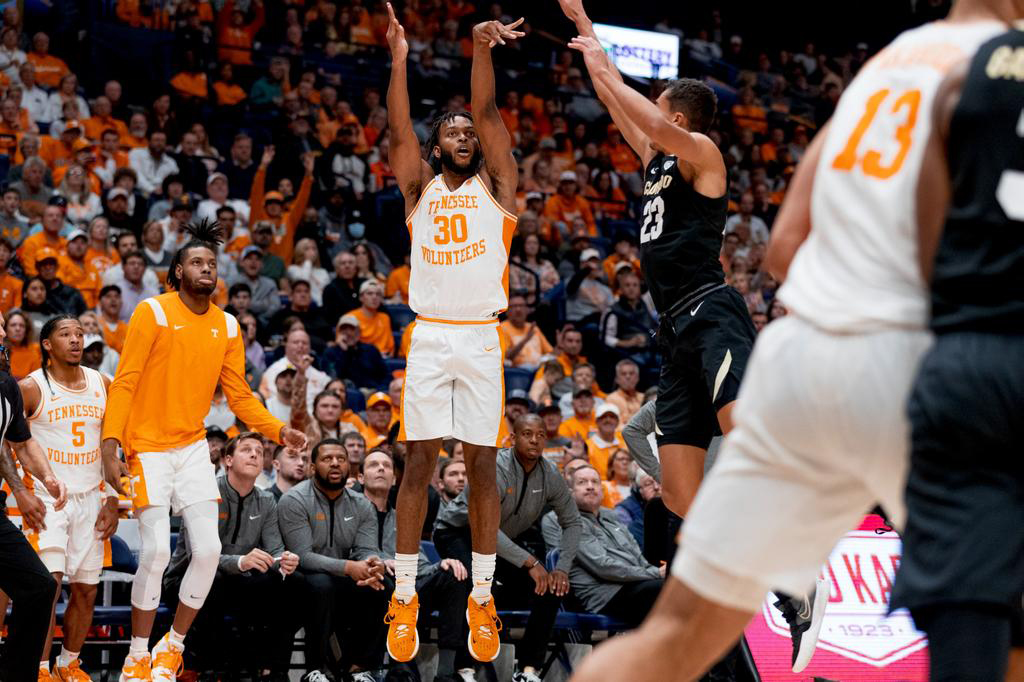 Tennessee’s Josiah-Jordan James (30) takes a shot vs. Colorado on Sunday in Nashville. The Buffaloes upset the No. 11 Vols 78-66. UT Athletics photo by Andrew Ferguson

A second-half surge of 46 points for Colorado was the difference Sunday afternoon as the 11th-ranked Vols fell to the Buffaloes, 78-66, at Bridgestone Arena in downtown Nashville.

Despite its shooting woes, Tennessee (1-1) was successful drawing fouls and getting to the line. As a team, Tennessee shot 30 free throws, hitting at an 80 percent rate. After firing 21 shots from the charity stripe in the first half, the Vols attempted only nine in the second stanza. More than half of Tennessee’s field goals came from beyond the arc, but the Volunteers sank just 27 percent from long range.

Tyreke Key and Josiah-Jordan James tied for the team lead in points scored with 15. James shot 4-of-8 on 3-pointers, while Key did most of his damage from the foul line, going 9-of-11. Olivier Nkamhoua grabbed a team-high 10 rebounds, finishing with double-digit boards for the fourth time in his career. Santiago Vescovi also finished with double-figure scoring, recording 11 points. The guard also tallied a career-best five steals.

The Vols finished with 11 steals as James complemented Vescovi with three of his own. Key also swiped a pair.

Simpson finished with 23 points and 10 rebounds for the Buffs, securing his first career double-double.

The Vols are back in action Wednesday when they host Florida Gulf Coast at 7 p.m. at Thompson-Boling Arena.