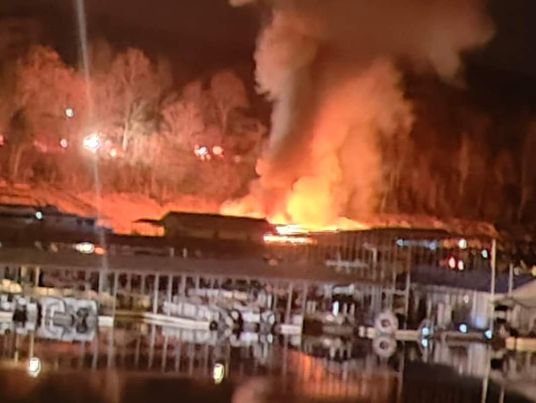 Two burning boats at the Cedar Grove Marina & Campground in New Tazewell create a blazing ball of fire in the skyline during the early evening hours of Nov. 22. Photo by Megan Krystof

The Cedar Grove Marina & Campground has suffered yet another fire – this time, originating from two houseboats docked on the buoy-line of the Cape Norris side of the Lake. The houseboats were tied to a dock just past the dead-end of Cape Norris Road.

There were reportedly no injuries. One of the two houseboats was occupied. However, that person was out fishing when the fire began. The blaze was contained to the two boats and, due to quick thinking and a rapid response, did not spread to anything else along the dock or to other customers’ properties.

As was the case in the last fire, docks were cut loose and left to float away from the other ones while first responders were working.

Marina owners took to social media to express their feelings.

“Thank you to all the fire departments who responded and every volunteer who prevented the fire from taking the entire line out. Thank you, to each person who reached out or showed up to offer help and support. We truly appreciate all of you,” reads the Facebook post.

The fire began shortly after 8 p.m. and was brought under control by area firefighters before 9 p.m.

The cause of the fire has not yet been determined.