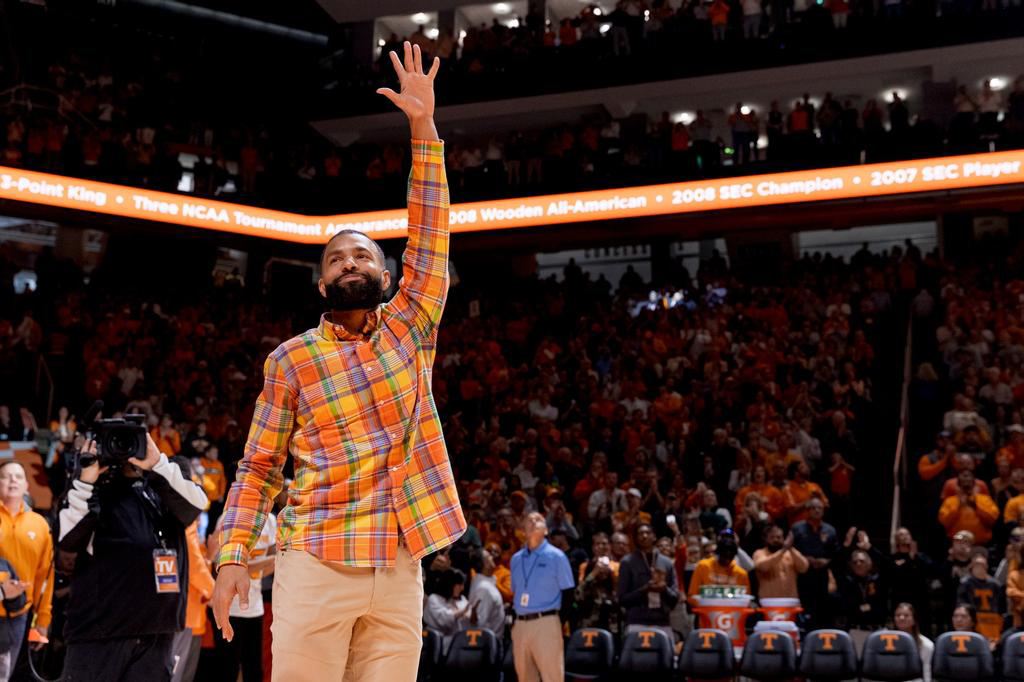 Chris Lofton has his No. 5 jersey number retired during the game between the Kentucky Wildcats and the Tennessee Volunteers at Thompson–Boling Arena. UT Athletics photo by Andrew Ferguson

Tennessee (14-3, 4-1 SEC) brought the game back to a tie with 5:50 remaining, but a late Kentucky run provided distance that helped the Wildcats fend off a six-point scoring run by the Volunteers with just over a minute left. The Vols could not get the elusive equalizer to fall, however, as multiple driving layups rattled in and out of the tin late.

Kentucky (11-6, 2-3 SEC) snapped a two-game losing streak behind 18 points from Antonio Reeves, along with 15 points and 13 rebounds from Oscar Tshiebwe. CJ Fredrick added 13 for the Cats.

UK capitalized on strong rebounding, besting the Vols 43-23 on the boards Saturday. Despite being out-rebounded, Tennessee found its offensive stride in the paint, doubling up the Wildcats, 36-18, in that category.

Tennessee senior Uros Plavsic answered the bell in the post, dropping a career-high 19 points on 9-of-11 shooting. He did so largely battling Tshiebwe, a physical matchup on both ends of the floor that lasted the duration of the game.

In a game during which he moved into a tie for fifth place on UT’s career list for 3-point makes (231), senior Santiago Vescovi finished with 13 points and a game-high four steals.

The Vols started the game on an 8-0 run for the first four and a half minutes of play. Kentucky countered with a 13-2 run of its own and it was a dogfight for the rest of the period, as the sides battled for every basket. Tennessee outscored the Wildcats 16-10 in the paint, and Plavsic played a big part of that, sinking 3-of-4 tries during the period. But a 12-3 Kentucky run in the final four minutes of the half put Tennessee behind by seven, 33-26, at the break.

Plavsic went to work to start the second, sinking three consecutive shots on the block, backing down Tshiebwe—the reigning national player of the year—to begin the second half. Defense ruled early in the second half, but Vols guard Tyreke Key enlivened the sold-out arena with a deep 3-pointer to tie the game at 41. Kentucky made eight of its 22 free throws in the final four minutes of play and managed a seven-point final margin, 63-56.

During halftime of Saturday’s game, Tennessee legend Chris Lofton (2004-08)—the SEC’s all-time 3-point king—became the fifth Vol ever to have his jersey retired when a banner bearing his No. 5 was hoisted to the Thompson-Boling Arena rafters.