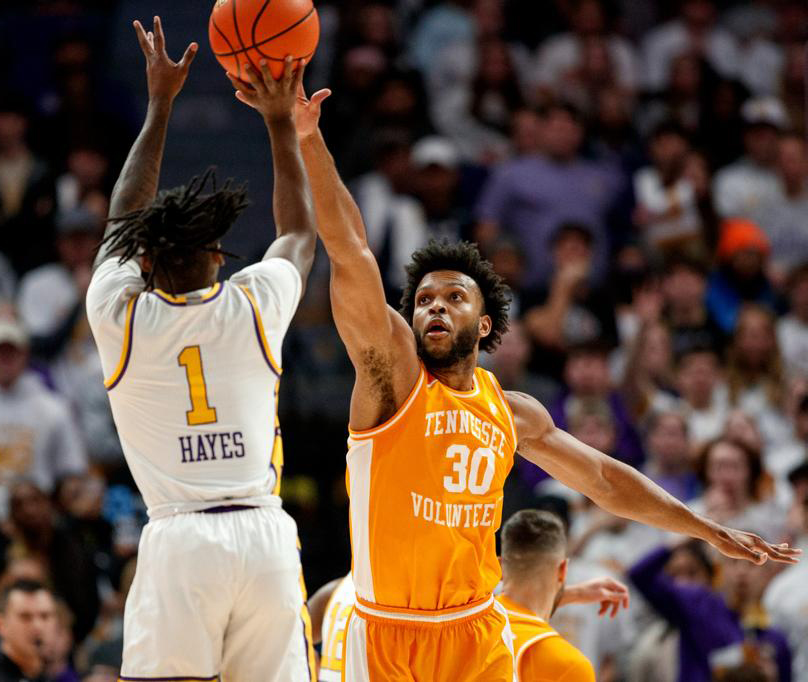 A season-high 22 points from Josiah-Jordan James and a second-career double-double from Zakai Zeigler spearheaded No. 9 Tennessee’s blowout road win Saturday, as the Vols cruised by LSU, 77-56.

After leading by 17 points at halftime, Tennessee never led by fewer than 15 in the second half and built its lead to as many 27.

As a team, Tennessee scored 33 points off of turnovers, while LSU had just seven. The Vols also hit 12 3-pointers—tied for a team-high in SEC play—while limiting the Tigers to just four makes from beyond the arc.

On a day in which Tennessee had four players score in double figures, James led the way with a season-high and game-high 22 points on 9-of-16 shooting with four made threes. It marked his third-career game of 20 or more points. The senior also recorded a team-high-tying seven rebounds and three steals.

Julian Phillips and Tyreke Key each scored 10 points and both hit a pair of threes. Key also pulled down a season-high seven rebounds.

In 20 minutes off the bench, Jonas Aidoo scored eight points and had seven rebounds.

Tennessee took control of Saturday’s game early on and never ceased control. In a first half where it shot just 39 percent from the field, the Vols still took a 17-point lead into the break at 39-22.

After LSU made its first three shot attempts and took a 7-6 lead less than two minutes into the game, the Vols held the Tigers without a field goal for more than nine minutes of game time—pulling in front 16-9 in the process.

LSU briefly pulled within three points at 16-13 after scoring on back-to-back possessions, but then Tennessee took a stranglehold on the game with a quick 11-4 run that featured threes from Santiago Vescovi, Phillips and James.

The Tigers stopped the bleeding with a 3-pointer—one of just four on the day for LSU — but the Vols answered with another run to close out the half, this time a 12-2 spurt capped by a mid-range jumper from James six seconds before halftime.

Tennessee made a total of 13 shots in the first half—eight of which were 3-point baskets.

James led the way for Tennessee in the first half with 10 points and two made threes, while Phillips also made two threes and had eight points despite playing just seven minutes in the opening period. Zeigler had six assist and no turnovers to go along with five points.