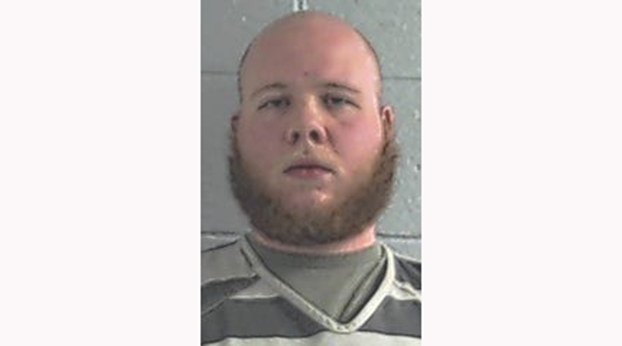 The former Claiborne Sheriff’s transport officer who enjoyed his 15 minutes of fame for playing Russian roulette in heavy traffic has found himself in more trouble.

Noah Arnwine was pulled over by Tazewell Police Department officer Colby Werner during the early morning hours of Feb. 13 for failing to maintain a traffic lane. Upon further inspection, Werner determined Arnwine to be under the influence and packing a firearm. He was also found in possession of marijuana and drug paraphernalia.

Arnwine, 21, was arrested on scene and booked into the Claiborne County Jail shortly before 5 a.m.

The then-19 year old pleaded guilty in April, 2019 to passing the time with a little game of Russian roulette while riding shotgun in a transport vehicle. He pulled out his personal .38 Ruger, emptied all but one bullet and repeatedly pulled the trigger until successful in shooting through the windshield into heavy rush hour traffic. Arnwine and fellow officer and driver deputy Cody Lankford were en route along Interstate 75 north near the Loudon/Monroe county line.

Lankford described the scene to his supervisor, former assistant chief deputy Mark Ellis, who recorded the conversation that was later leaked to the media.

Ellis said at the time that he recommended that Arnwine be fired and charged with a felony. However, according to Ellis, Claiborne Sheriff Bob Brooks ignored the advice and kept the shooting quiet.

Arnwine managed to keep his badge for another 9 months, losing it after being written up three times. He was terminated on Aug. 19 just prior to a TBI probe into the incident. The official reason for dismissal was refusal to follow an order to work in the jail tower.

The shooting incident was the second written warning. The first and final official reprimands were for “job performance,” according to Brooks.

The case crept along for nearly 18 months, being bandied back and forth by the attorneys general for the two counties, which are in separate Judicial Districts.

It took less than 3 hours from the time Arnwine turned himself in to the Loudon County Sheriff’s Office, was booked in jail and his plea agreement concluded.

For his actions, Arnwine pleaded guilty to misdemeanor reckless endangerment. He was sentenced to 11 months, 29 days unsupervised probation and ordered to complete a gun safety course along with community service.