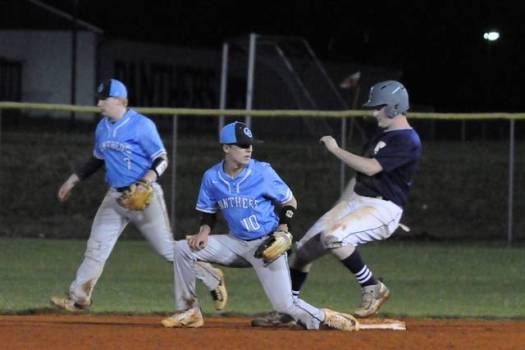 <p>Micah Cannon waits on the throw as a Bulldog steals second.</p> 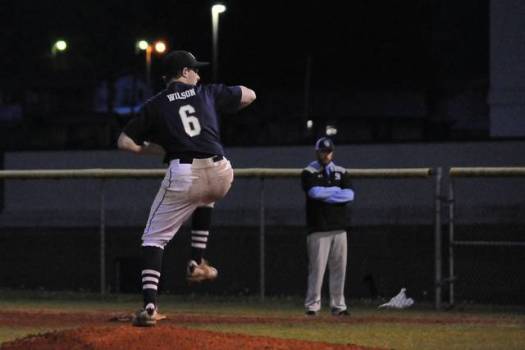 After falling to the Bulldogs during game one of a double header, the Panthers needed to shake off the loss. Coach David Hamilton gathered his team together in the dug out and said, “Get your heads up. We have another game to play so let’s go out there and play hard.”

His team did play hard but they still had trouble plating runs despite having many base runners in scoring position.

Claiborne got going early as Ryley Hager singled and scored Elijah Beason but the Panthers responded with a run of their own on a passed ball by the Bulldogs.

With the score 1-1, the Bulldogs had a big second inning. Jon Werner, Cedric Brown, Hager, Gage Callebs and others used hitting and Panther errors to extend the score out to 9-1 after two innings.

Brady Pearman, Matthew Massengill and Peyton Wilder combined to get the Panthers right back into the game. The score was 9-4 after the Panthers top of the third.

Hager and Beason combined to plate a run making the score 10-4.

During the Panthers top of the fourth, Peyton Welch had an RBI single and advanced into scoring position on a bad throw. A deep fly ball plated Welch and made the score 10-6.

The Bulldogs did little at the plate during the top of the fifth and the Panthers were faced with their final at-bat. It just wasn’t meant to be for the Panthers who fell by the final score of 10-6 in a scheduled five inning game.

With the win, the Bulldogs swept their rival but more importantly remain second in district play with only two district games with West Greene left before tournament action begins at Lincoln Memorial University, May 5.