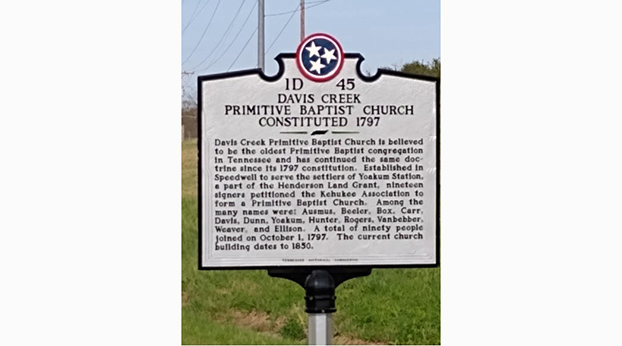 For 223 years, the members of Davis Creek Primitive Baptist Church have met together in worship through hardship and through bounty. Located just off Old Hwy. 63 in the Speedwell community, the church remains a beacon to those willing to walk through its doors.

The church was constituted on the banks of Davis Creek, once known as Yoakum Station – a part of the Henderson Land Grant. Nineteen individuals petitioned the Kehukee Association of Primitive Baptist Churches to see whether the doctrines held by the original members were close enough to warrant being part of the Old Line Churches.

The Kehukee Association agreed and, on Oct. 1 of 1797, the church was constituted and issued the Rules of Decorum & Constitution of which the existing congregation still holds and practices.

That first congregation included some 90 individuals who became members when the church was accepted by the Kehukee Association.

“For over 223 years, the same practices and doctrine has been the guide for Davis Creek Primitive Baptist Church. While there are many buildings older than us, we hold the ‘Original Keys’ which is the actual handwritten constitution signed and doctrines issued in 1797,” said Elder Rick Jernigan.

The original meetings were likely held in members’ homes. A log cabin later served as the church structure, replaced in the 1850’s with the current meetinghouse.

Jernigan says the land on which the existing church sits was deeded to the congregation by one of its members, Joseph Hunter, in 1838 at the cost of $15.

Since 2017, members of The Bell Tower Group have worked tirelessly to restore the historical church to as near its original structure as possible.

“Our Lord has blessed us to replace the roof, update the electrical/lighting, replace the well with water service and purchase some of the materials needed to start the replacement of the old original siding,” said Jernigan. “The historical marker is just one small part of the accomplishments of the Bell Tower Group to bring recognition to the perseverance and determination of a faithful group of individuals to worship God as their forefathers have done for over 223 years.”

The church recently celebrated the unveiling of the Tennessee Historical Commission marker designating the structure and grounds as likely the oldest Primitive Baptist congregation in the state.

According to the marker, several well-known and respected county surnames are among those who signed the original 1797 petition. Included are Ausmus, Beeler, Box, Carr, Davis, Dunn, Yoakum, Hunter, Rogers, Vanbebber, Weaver and Ellison.

“It’s our intent to hold a commemorative gathering the first weekend in October to celebrate the 224 years the church has practiced the same beliefs and preached the same doctrine,” said Jernigan.

For more information about the celebration, or to find out more about the church, log onto: www.daviscreekprimitivebaptistchurch.com. You may also email Jernigan at:  jljernigans@outlook.com or call 423-489-0697.