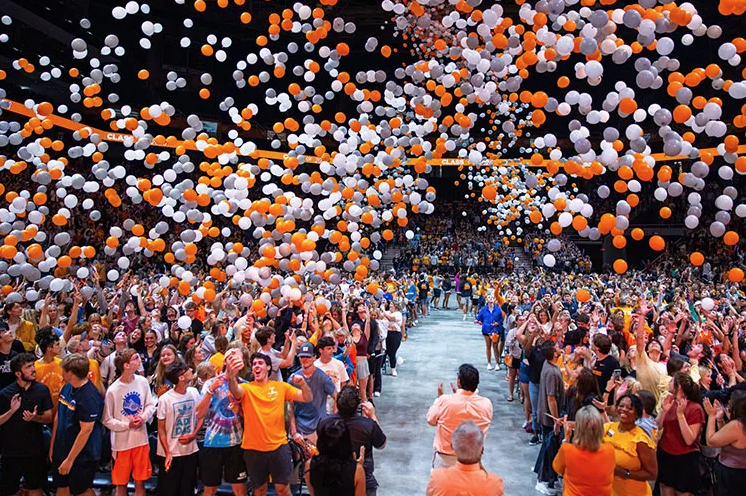 2022 Torch Night at the University of Tennessee. UT photo

The University of Tennessee has welcomed its largest student body in history this fall, driven by both an increase in new students and a record number returning for their sophomore year.

Three years after launching the Division of Student Success, UT is changing the way universities think about what students need to thrive on campus. The division has launched a strengths-based approach to learning that helps UT students identify and leverage their talents. At the same time, initiatives like Vol Success Teams, the UT Success Academy, and the Veterans Impact Program ease the transition into college and help students building lasting relationships that create a sense of belonging.

Combined, these efforts are moving the needle on student retention, which has increased by about 3 percent over the last three years since the division launched.

“I am so proud of all our Volunteers and the work they did to get here—whether they are a new student or a returning student,” said Chancellor Donde Plowman. “We believe in them and are invested in their success. UT is a university on the rise, and we’re seeing that people all over the country want to be part of what’s happening here on Rocky Top.”

Not only is UT setting records in enrollment and retention but across the university as well—with record years in research expenditures, donor funding, state support, athletic success, and more.

Although enrollment numbers aren’t final until the 14th day of the fall semester, about 6,785 first-year students have joined the Volunteer family on Rocky Top. This is an increase of about 14 percent over last year’s class, which was previously the largest on record.

The incoming class includes recipients of the inaugural Distinguished Tennessean scholarship. The award, which goes to a top scholar from each of the state’s 95 counties, covers full tuition and mandatory fees and is renewable for four years.

UT is also launching the first-of-its-kind Veteran Impact Program, which will provide incoming student veterans with academic and professional programming, resources, and support to help them successfully navigate the transition from the military to university studies.

This fall, UT will welcome about 200 student veterans to campus—expected to be the largest group since the Veterans Success Center was established in 2017. More than 1,200 student veterans and military-connected students are currently pursuing degrees on campus. Earlier this year, the University of Tennessee System approved a measure allowing veterans, active military, and ROTC cadets to attend a UT institution at the in-state tuition rate.

Highlights from the Class of 2026

First-year students hail from all 95 Tennessee counties, 49 states, and 35 countries.

Students of color make up more than 17 percent of the first-year class, representing a 31 percent increase among first-year students since 2016.

95 percent of in-state, first-year students qualify for the HOPE Scholarship, and 84 percent receive some form of scholarship or financial aid, showcasing the university’s investment in its students.

More than $63 million awarded in scholarships/grants to first-year students annually.

More than 88 percent of in-state, first-year applicants are given a pathway for admission to UT.

Students in the middle 50 percent of the incoming class have ACT scores ranging from 25 to 30, with an average score of 28 for the new class.

First-year and transfer students will be greeted with six weeks of programming to kick off their Volunteer experience. Big Orange Welcome—the final phase of orientation for incoming students—features hundreds of events for students to explore all that UT has to offer.

On August 21, students participated in Torch Night, a rite of passage for incoming Volunteers. In the tradition, which began in 1925, each class vows to take up the Torch of Service during their time at UT and beyond. Today, Vols learn more about the role they play in the Volunteer community and what they can do to make an impact at the university. Continuing the time-honored tradition, students raise orange or white glowing sticks and recite the Torchbearer’s creed. This year’s Torch Night took place in Thompson-Boling Arena.