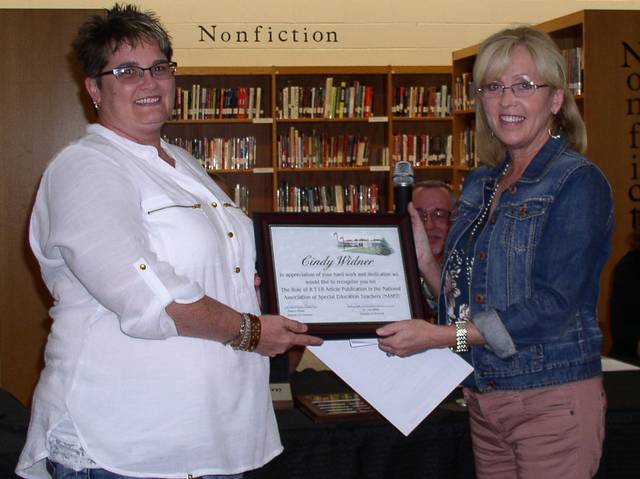 Cindy Widner, left, is given recognition by Sherry Rowe for her recent publication of an article in the National Association of Special Education Teachers (NASET). Widner, who is a gifted teacher in the Special Education Department of the Claiborne school system, is currently working toward her doctorate in curriculum instruction.

“What I would like to know is, we as teachers, principals, administrators, board members – what do we do for suicide prevention? Four and a half months ago, we witnessed it. And, a lot of times, suicide is contagious. I would like to see or hear things that we may be able to do to help the students through this process,” said Claiborne County School Board member Shane Bunch, during the meeting last week.

Bunch said he had taken the time, each weekday while driving his son to school, to discuss the issue.

“He’s only 11 years old, but I feel I need to share things way out front, so when it starts happening I can say ‘remember that talk we had?’

“I share things with him to try to get his attention about how that affects everyone around him,” said Bunch.

The county is required by the state to administer annual suicide prevention training modules to anyone who has regular contact with students, according to a school counselor who was present in the audience.

The school system is in the beginning stages, she said, of looking into acquiring the Project Aware Program funded through a grant normally given to one school system in each of the three state regions.

She said she had also been in contact with the local Cherokee Health Systems. Although ‘premature,’ she said she was hopeful that space could be provided within the schools for therapists and clinicians to address with students behavioral and health issues in partnership with principals and counselors.

A new law now allows counselors to recommend students for therapy services, without cost to the county. In the past, she said the school system was limited in suggesting those services be used by students because of the inherent responsibility in paying for the services.

In other action, the students in the Health Science Programs at both high schools will be receiving instruction on an ambulance simulator, once the equipment is installed.

The cost of the two simulators will be paid via a CTE (Career Technical Education) grant totaling $8,000. Installation of the permanent structures will begin on Nov. 1.

Dr. Joseph Miller, director of schools, announced an upward swing in the latest ACT scores earned by the students at the two high schools. The score rose from a former 17.7 to the current 18.9, he said.

H.Y. Livesay Middle School won the September attendance record, beating out the competition by one-hundredths of a percentage point. The lowest attendance record for the month was 92.5 percent.

Linda Fultz asked that her fellow board members consider changing the current policies to allow teachers to donate their sick days to a teacher’s aide. She asked that the issue be added to the next school board workshop.