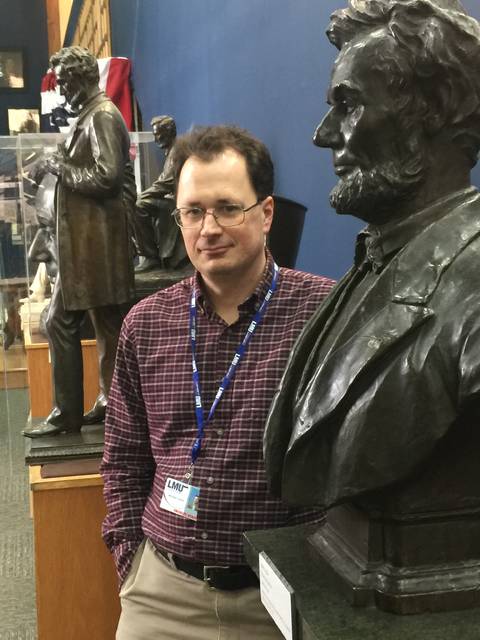 Michael Lynch has been named director of the Abraham Lincoln Library and Museum, which reopened Tuesday.

Michael Lynch is serving as director of the Abraham Lincoln Library and Museum (ALLM), which reopened on the Harrogate campus of Lincoln Memorial University (LMU) on Jan. 2, following a brief closure for renovations.

Lynch, a fourth generation LMU graduate, is no stranger to the museum where he has worked as student and professional in the past. His great-grandfather was a graduate of the original LMU medical school in Knoxville. His paternal grandfather was a graduate as well as his mother, Dr. Sylvia Lynch, dean of the Caylor School of Education. Lynch was a member of the inaugural seventh grade class at his high school alma mater, J. Frank White Academy (JFWA). He went on to LMU and graduated with a degree in history.

A love of paleontology, and later the Revolutionary War, fueled his interest in museums. After graduation from LMU, Lynch served as assistant curator for the ALLM. He served as executive director of the Jack Jouett House Historic Site in Versailles, Kentucky, from 2007-2008. He calls this position his “fourth tour of duty” at LMU where he has been a curatorial assistant (2001-2002), assistant curator/historian (2005-2007) and adjunct professor of history (2008-2014).

“I’ve always wanted to combine museum work with teaching and stay in Appalachia, so this is everything I wanted out of a job,” said Lynch, who will also be teaching history at LMU.

According to Lynch, who has given numerous tours at ALLM, the most common question visitors ask is why there is a museum dedicated to Abraham Lincoln in East Tennessee. Lynch is planning an exhibit at the entrance of the museum that will include a history of LMU and the story of Lincoln and his instructions to Gen. O.O. Howard to help the people of the area.

The second most common question from museum visitors concerns the bed exhibit, which is the bed Lincoln slept in the night of his 52nd birthday.

“Many visitors first guess it is Lincoln’s deathbed, which is actually in the Chicago History Museum,” Lynch said. “The bed in our museum is a very intimate connection to Lincoln as well.”

The crown jewel of the ALLM collection remains the walking stick carried by Lincoln the night of his assassination, according to Lynch, which was gifted to LMU by a grocer. The actor who found the walking stick traded it to the grocer to pay off a debt.

Lynch has a master’s degree in U.S. history from the University of Tennessee, where he is nearing completion of his Ph.D. in Early American History.

Lynch joined the museum as it officially reopened to the public Jan. 2 following renovations that include new carpeting throughout, a Civil War gallery remodeling and the removal of the long counter at the entrance. The new gift shop counter is beside the doorway to the Arnold Auditorium. Other updates and renovations will continue into 2018, including a gallery that will highlight Lincoln’s life from birth to presidency.

The Kincaids made the Judeo-Christian ethic a priority in their years of service to their local congregation and beyond. That priority continues with the funding for the Kincaid Gallery and the Dr. Robert L. Kincaid Endowed Research Center within the ALLM, and the museum’s Kincaid Lecture Series.

Hansel O. Kincaid was a full-fledged member of “The Greatest Generation.” After graduating high school in Florida, he served with distinction as an enlisted soldier in the European Theater of WWII. With the help of the GI Bill, Hansel earned a BA in accounting from Tulane University. He practiced as a CPA in Midland, Texas, for more than 50 years.Dorothy Meyers Kincaid graduated high school in Longview, Texas, and earned a bachelor’s degree in biology from Texas Woman’s University. In addition, she was licensed as a medical technician from the distinguished program at Charity Hospital in New Orleans. Dorothy and Hansel shared a strong interest in sports, especially tennis.