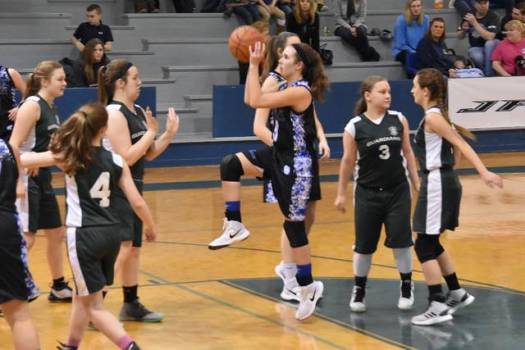 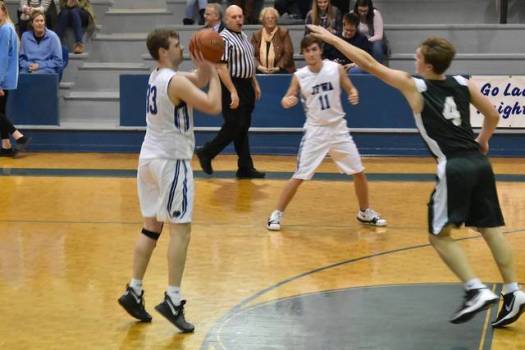 <p>Tanner Brush offers up three of his 23 to lead the Knights.</p>

The first of two games was the girls’ game with the Lady Knights looking for their 20th win of the season. Early on, the Lady Knights were focused and pulled out to a 13-4 advantage. Beraya Piercy and Kinsee LeFevers were putting the ball through the basket and helped the home team run out to an 11 point lead at 18-7 by the end of the first period. Abigail Gardner came on strong during the second period in both scoring and rebounding. The Lady Knights defense allowed Presley Cole and Kyla Piercy to get some easy looks on the offensive end allowing the Lady Knights a comfortable halftime advantage of 40-11.

Coming out of the locker room, the Lady Knights defense shined, allowing only two points. They lead after three periods, 52-13. A running clock slowed down the scoring totals for both teams during the final period but by the final buzzer the Lady Knights had won the game, 60-19. Leading JFWA in scoring was Beraya Piercy with 14. LeFevers had 13, Cole had nine, Bri Tinnell finished with eight. Two recorded six each including Kyla Piercy and Abigail Gardner. Chrissy Bradley completed the total with four points. Lindsey King led the visitors with 11 points.

JFWA celebrated its seniors and parents during a ceremony between games. Next on the floor was the Knights and they came out to do battle with the Guardians. Leaning on the efforts of Isaac Duncan and Jake Gross, the Knights pulled away 10-6 but good shooting from the Guardians put them right back in the game by the end of the period having tied it at 10.

Nate Rhylick hit a three to open the scoring for JFWA but the Guardians were first to the stripe for one-and-one. Duncan lifted the Knights each time the game got close during the second period by scoring or stealing the basketball, keeping the Knights ahead by four points. Tanner Brush helped the scoring total out with a three and a Duncan basket gave the Knights the lead at 28-21 going into the halftime break.

The Knights played well and grabbed a 10-point lead half way through the third period and finished the period leading by 11 points. Brush and Rhylick led the second half charge that allowed the Knights to win, 65-48. Brush led the Knights with 23. Jake Gross had 11. Rhylick had nine, Duncan finished with eight points. Alex Wright finished with seven, Jacob Yeary dropped in five points. Noah Robertson completed the total with two. Leading the visiting Guardians in scoring was Nathan Mauger with 15 points.