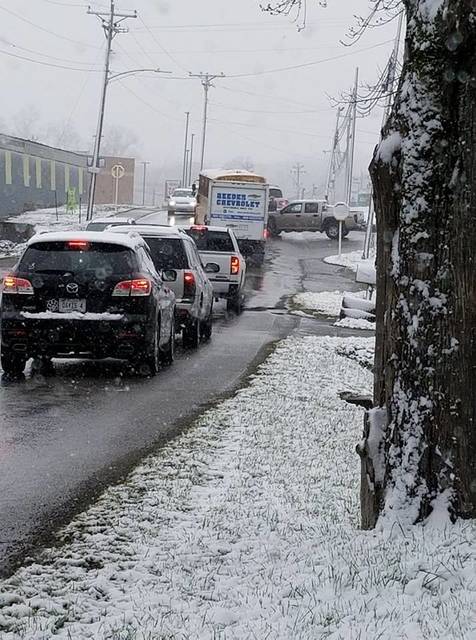 A Chevy pickup truck, driven by Steven Beach, gets a sideways shove by bus No. 456 on Wednesday morning, as both drivers attempt to negotiate the three-way stop sign at the intersection of Main and Davis Streets, in New Tazewell.

Students riding bus No. 456 got to school Wednesday morning a bit late, due to a collision between their ride and a Chevy pickup truck, driven by Steven Beach.

Reportedly, no one was injured during the accident that occurred at the intersection of Main and Davis Streets in New Tazewell.

New Tazewell Police Department Officer Mike Patton, who worked the incident, said that bus driver Emma Milam “was distracted some way and ran the stop sign.” She pulled into the intersection in an attempt to negotiate a right-hand turn onto Davis Street, failing to notice Beach’s truck already moving into the intersection for a left-hand turn onto Main Street, he added.

The bus sustained minor damages. Beach’s truck was towed from the scene.

The students were transferred to another bus and transported the remainder of the way to school, without incident.