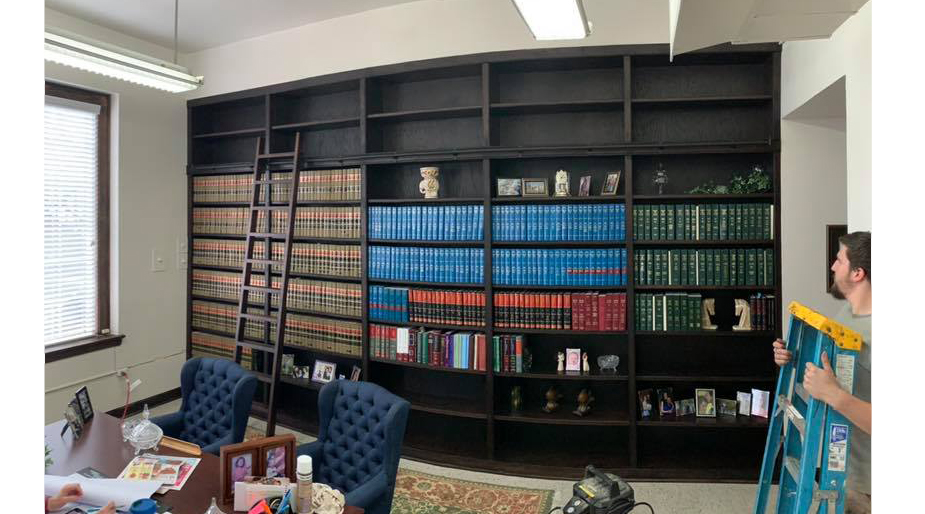 This bookcase and ladder were installed in the office of Circuit Court Judge John McAfee.

Wayne Lee, a former Claiborne County deputy, alleged through two fraud, waste and abuse reports that Brooks used county funds improperly, and without going through the proper channels. The reports are submitted to the Tennessee Comptroller of the Treasury, which conducts investigation of such claims.

The first complaint alleges that Brooks, in complicity with McAfee, “squandered public funds of Claiborne County” by purchasing and installing a custom-made bookcase in McAfee’s office in the Claiborne County Courthouse.

Lee’s complaint states that the bookcase was “a total waste of county funds for a bookcase installed in the office of a state trial judge.” He added that the bookcase holds books belonging to the state that are “obsolete, as they are now on computer. These books are for show only,” Lee stated in his complaint.

Claiborne County Finance Director Angelia Tucker said the bookcase project was under the bid limit per policy at that time, and that anything between $5,000 and $10,000 was not required to be bid, but three quotes were to be obtained.

The low estimate was not selected. Instead, the $7,155 bid by Skaggs Creek Wood Shop was chosen, and according to Brooks, quality was the reason. He noted the comparison of the quality of the higher bids, and said comparing materials offered in the lower bid to the others was like “comparing apples and oranges.”

A statement from McAfee explained how the bookcase project came about.

“In early 2019, I asked the Claiborne County mayor, Joseph Brooks, if the county could help with the shelving in the Circuit Court Judge’s office,” the statement said. “After the mayor consulted with the finance director, Angelia Tucker, he requested that I get three estimates.  My legal assistant contacted three local contractors, and they presented their estimates for built-in shelving directly to the mayor. After the finance director approved the project, the mayor informed my office that a contractor, Skaggs Creek Wood Shop, was selected. I did not have anything to do with the evaluation of the estimates or with the selection of the contractor. The shelving was completed about September of 2019.”

Lee’s first complaint also stated that he believes the county should be paid for the use of McAfee’s office space. The complaint said the use of rent-free office space by a state trial judge is “another example of wasteful use of county property.” He went on to suggest that the state, through the AOC, “should reimburse Claiborne County for the cost of the bookcase and begin paying the county rent for the office space being used by the trial judge.”

An emailed statement from Barbara Peck, communications director of the Tennessee Administrative Office of the Courts, denied the claim that bookcases in the judge’s office would be for books that are obsolete or for show.

“Law books are not obsolete and just for show. The Administrative Office of the Courts publishes several books a year that have unique features not available online, including comparisons showing how a law or provision has been changed since the previous year, and also provides judges with books on key Tennessee laws, rules, jury instructions, and forms,” she wrote. “There are very few judges who have completely abandoned the use of all books or other printed materials at this time.”

Peck’s statement added that the office space used by McAfee is in accordance with state law.

“Under TCA 16-2-505(d)(1), counties are required to provide office space and furnishings to the state judges who serve the county,” she wrote, adding that for the AOC to pay for rent and furnishings would be a contradiction of state law.

“The circuit court judge in Claiborne County has been provided office space and furnishings since 1941, as is required under state law,” she concluded.

The second complaint filed by Lee claims use of county money which was designated for another purpose. It states that money originally intended for developing a transitional plan to evaluate county buildings for compliance with the Americans with Disabilities Act was spent on invoices to BarberMcMurry Architects. He claims the money was supposed to be paid to Partners and Associates, Inc., doing business as Partners Development.

County records show an invoice was paid in the amount of $9,162.80 to BarberMcMurry on Nov. 8, 2019, and the invoice indicates  the project was for Claiborne County Courthouse renovations.

Tucker said in a statement that the Building, Grounds and Personnel Committee of the county commission voted May 28, 2019, to allow a study to renovate the old jail in the courthouse to be the location for the finance office. She said discussion about ADA compliance took place at a July 15, 2019, BGP meeting, and that Mayor Brooks gave an update during that meeting stating that BarberMcMurry would be arriving on July 17 for preliminary looks and scans. She said $10,000 was the threshold, but according to TCA 12-4-106, contracts for professional services shall not be based on competitive bids.

Tucker said that on Dec. 16, 2019, the county commission approved a resolution allowing Partners & Associates to do the ADA analysis, and the budget was amended to reflect that resolution. She said the invoice was paid January 2020.

Once received at the Tennessee Comptroller of the Treasury’s office, the claims will be investigated. John Dunn is director of communications for the comptroller’s office, and he said the office cannot confirm or deny receipt of any complaint.

“When a complaint comes in to our fraud hotline or is reported in some other way, it goes through a triage process to determine whether there is some validity behind the allegations,” Dunn said. “If there’s enough of a hint of validity, it would get assigned to an investigator or county auditor.”

Dunn said the timeline can vary based upon the work required to reach a conclusion. He said sometimes a resolution can come quickly, and said that would be “within a couple of months.” Other cases can require up to a year of investigation, according to Dunn. He said an investigation could involve looking at public records or subpoenaing bank records, which makes for a more lengthy process.

“Every investigation that we do that ends up finding some sort of substation fraud, waste or abuse, ends up with a report made available to the public. Many times the district attorney in local communities are interested, and have the power and authority to seek an indictment,” he said, adding that a case involving a possible indictment would be presented to a grand jury. He added that if nothing material is found in a complaint, there is no report issued by the comptroller’s office.

THP remembers one of their own