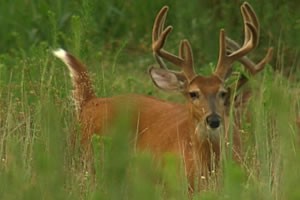 Tennessee deer hunters are always outspoken about their feelings concerning rules and regulations especially when it comes to regulating buck deer.

Currently Tennessee deer hunters are allowed two bucks per season. Not long ago there was a three buck limit which allowed hunters the opportunity to harvest one buck during archery, muzzle loading and gun seasons.

During that period, many hunters fought to have the regulations changed to allow only two bucks a season and eventually TWRA did make the change with the hopes of more bucks becoming mature. Ask any local sportsman and woman, they will tell you that the bucks are living longer; therefore, they have the larger antler traits trophy hunters desire.

Pete Cunningham of Cunningham’s Slaughterhouse also confirmed, “We have been getting better deer in here for the last two seasons. A lot more deer that are eight points or larger.”

Still, for some it’s not enough. The trophy hunters are looking for deer with 150-200 inch antlers will insist the state needs to adopt a one buck limit.

Other hunters want a three buck limit and the meat eaters out there think it’s fine where it’s at.

Here are a few comments from hunters who have a strong opinion regarding the issue.

Coming from a very avid hunting family. I think it needs to go to one buck. (And so does my husband) Yes, you may see some nice looking deer. But a lot of people will shoot anything that has horns. That eight may just be a little basket rack. But if you let him mature he will become a large eight or even a very nice ten pointer. Back when I was younger we used to see 20 does at a time with five or so bucks running with them. Now we may see three or four does together with maybe one buck.

Kevin Crane: I personally like the 2 buck limit. Typically I can get on a decent buck around here during early season then I always go to Land Between the Lakes around the rut where I have the option for a second buck since it counts as statewide if I don’t harvest there I can come back and still hunt the rest of the year.

Justin Cox: I like the two buck limit. That along with selective harvesting will allow our big buck population to take off and thrive.

The Tennessee Wildlife Resources Agency has to take these opinions and try to blend them into a season that is beneficial to both the hunter and the deer population.

Also there is the hunter who takes a doe on a foggy morning only to find he or she has actually taken a legal buck not being able to see the small three inch spikes. A one buck limit would end the season in this case.

Certainly, if TWRA changes to a one buck season the bucks will thrive and have the larger antlers some prefer.

TWRA has the unenviable job of setting a bag limit for every type of hunting that suits all types of hunters not just a select few and certainly not focusing on the trophy hunters over the venison hunters.