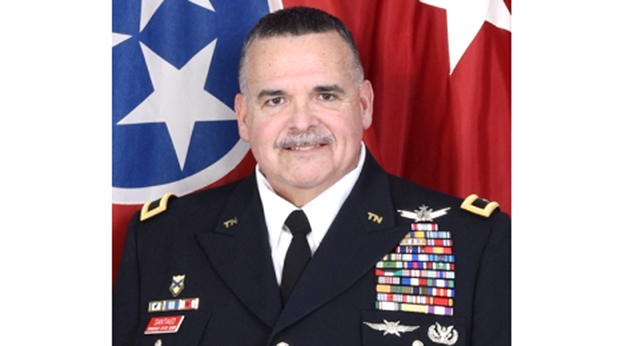 “Gen. Santiago is a committed Soldier and volunteer,” said Holmes. “He is a talented leader and I am looking forward to what he will bring to his new role in the State Guard.”

For more than 30 years, Santiago has served in the military as a member of the U.S. Air Force, U.S. Air Force Reserves, or the Tennessee State Guard. He is a veteran of Desert Storm and served as an Information Technology (Cyber) Officer for the Air Force. As a volunteer in the Tennessee State Guard, Santiago served in multiple leadership positions including Regimental Commander, Chief of Staff, and Deputy Commanding General for Operations. He is also the Executive Director of the State Guard Association of the United States.

Santiago is scheduled to assume command from Brig. Gen. (Tenn.) Craig Johnson, who has been the commander of the State Guard since August 2016, in an official ceremony in February 2021.

“Johnson has done a fantastic job for more than four-and-a-half years,” said Holmes. “It is a great loss to our State but his retirement is well deserved after spending more than 35 years in uniform.”

The Tennessee State Guard is the all-volunteer arm of the Tennessee Military Department headquartered in Nashville. It consists of approximately 500 personnel and authorized by Tennessee Code Annotated 58 1-401.

Why are Christmas colors red and green?