Livesay and Stone honored by coaches 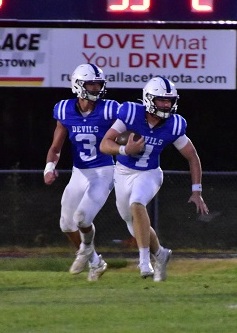 Storm Livesay and Eli Stone were tabbed with All-State honors from the Tennessee Coaches Association.

Coach Nathan Medlin took a moment to talk about the awards, “Storm Livesay and Eli Stone both have had phenomenal years this past season and careers at Claiborne. Both have been four year starters and have been leaders on and off the field for our team the entire time they have been in high school.

Storm Livesay was arguably always the most dynamic player on the field when he played. It seemed that everyone, myself included, was always waiting in anticipation to see what he was going to do.

Eli Stone was a calm and collected quarterback that all coaches hope to have. His ability to make huge plays and put our team in the best position became what was expected out of him.”

Medlin went on to say, “I’m so happy for both of our young men and the accomplishments and accolades they are receiving this year. They both have put in the work required to become great high school football players. I am so proud to be able to have been a part of their lives the past four years and I am so excited to see them continue to mature. The best is still yet to come for both of them.”