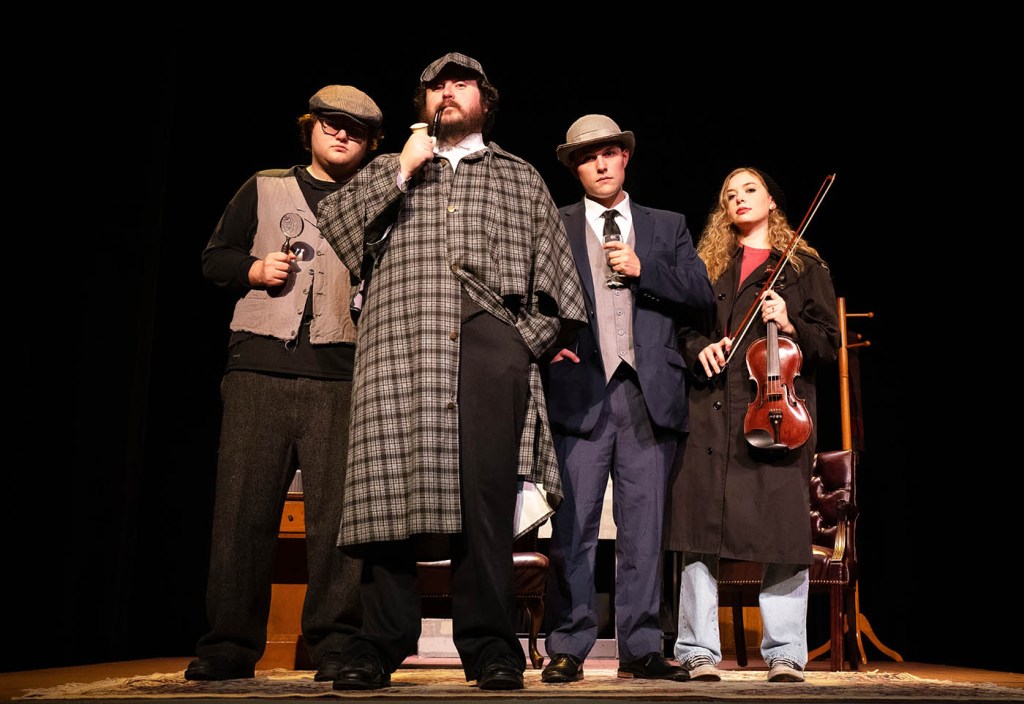 The four Sherlocks appearing in Walter State’s production of “The Adventures of Sherlock Holmes” are, from left, Rhodes Smith, a theatre major from Dandridge; Tyler McDaniel, a community member from Morristown; Matthew Dunn, a musical theatre major from Sevierville; and Lorryn Holt, a nursing major from Newport. The play runs Nov. 18-21 on the college’s Morristown Campus. Tickets will be available at the box office.

Walters State Theatre is coming back to the stage in a big way, presenting not one, but four great Sherlock Holmes mysteries featuring four great actors in the title role. The show opens Nov. 18 and will mark the first live, in-person theatre performance at the college since “Mr. Burns: A Post Electric Play” in October, 2019.

“We have had success with live radio-style productions, but there’s nothing like being on the stage,” said director TJ Kent, assistant professor of theatre and director of the play.

“The Adventures of Sherlock Holmes” is written by Jon Jory and based on original stories by Sir Arthur Conan Doyle. Here’s the twist: stories are spread over a century with the revered detective collecting clues in 1986, 1936, 1966 and 1996.

Audience members will see many new faces in this play.

“Many of the 10 cast members are on stage for the first time. And many take on several roles throughout the evening. Every member of this cast is working as hard as a professional and I have been very impressed,” said Kent. “Being able to watch detectives follow the clues and solve a case is a fascinating process for audiences, beginning with Sherlock Holmes. His influence reaches all the way to today’s police procedural shows and true crime documentaries.”

The play is written by Jon Jory based on four original stories written by Sir Arthur Conan Doyle. Showtimes are 7:30 p.m. Nov. 18, 19 and 20 and 2:30 p.m. on Nov. 20 and 21. The play will be in the theatre of the Judge William H. Inman Humanities Complex on the Morristown Campus. Tickets are $12 general admission; $10 senior citizens; and $5 students. Tickets will be available at the box office.