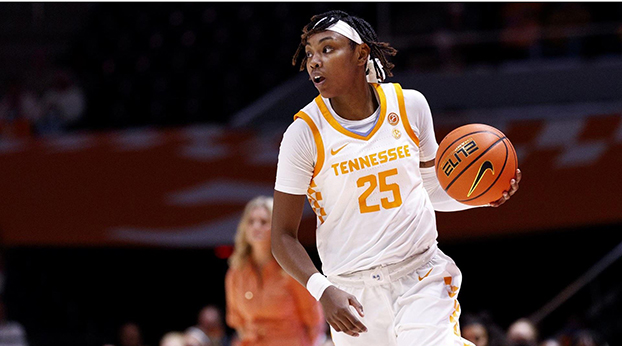 Lady Vol Jordan Horston handles the ball against Ole Miss. She scored 20 points and pulled down 11 rebounds in the win. - UT Athletics Photo

Junior Jordan Horston was the top scorer for the Lady Vols (15-1, 4-0 SEC), turning in a double-double with 20 points and 11 rebounds. Graduate Alexus Dye was also a top producer with 17, while sophomore Tess Darby scored a career-high 13 points.

Ole Miss (13-2, 1-1 SEC) was led by Shakira Austin who finished with 26 points and nine rebounds. Lashonda Monk was also in double figures with 11.

Snudda Collins hit one of three free throws to get the Rebels on the board first, but Tamari Key answered on the other end by getting an offensive board and turning it into three points after being fouled on the made basket. The Lady Vols then hit a shooting slump, going 0-7 from the floor over a five-minute span. Ole Miss jumped out to a 9-5 lead before the media timeout, but following the break, Key hit a pair of free throws to set off a 6-0 run that reclaimed the lead for UT at 11-9 with 3:15 left in the opening quarter. UM got a layup on the other end, but Tennessee closed out the first with five points capped off by an old-fashioned three-point play by Keyen Green to lead 16-11 at the start of the second.

Austin nailed a jumper 12 seconds into the second period, and the teams traded baskets until Darby followed up a Horston jumper with a trey on the next possession to put the Lady Vols ahead by nine at the 8:01 mark. Two more Darby 3-pointers and a jumper by Dye resulted in a 13-0 UT run that gave Tennessee a 32-15 lead with 4:20 left in the half. Monk converted on a pair of free throws two minutes later, but on the next trip down the floor Dye got the bucket and the foul to put UT up by 18. The Lady Vols would maintain that advantage over the final minute, taking a 39-21 lead into halftime.

Both teams came out hot in the second half, scoring baskets on four straight possessions to move the score to 43-26 less than two minutes into the third. Key hit the first of a pair of free throws, but five straight points by Ole Miss pulled the Rebels within 13 by the 7:35 mark. Horston converted on a 3-point play to put the Lady Vols back on top by 16, and that margin would hold until Austin scored five points in a row to put the score at 51-40 with 3:42 left in the quarter. Green hit a jumper to end the drought, and the closing minutes were a back-and-forth affair with a pair of free throws by Rae Burrell sending the game into the final stanza with the Lady Vols up by 13 at 57-44.

Collins opened the fourth with two made free throws, but Tennessee exploded with seven points in less than a minute to lead 64-46 with 8:24 left in the game. The Rebels rallied, launching into a 9-2 run and holding UT without a field goal for more than 6 minutes to pull within 11 with 3:11 to play. Brooklynn Miles ended the drought for UT with a layup at the 2:15 mark, and UM would cut it to 10 points less than a minute later, but Tennessee wound down the clock, and a final bucket by Horston gave UT the 70-58 victory.

UP NEXT: The Lady Vols travel to Nashville for a Thursday match-up at Vanderbilt. Tennessee and the Commodores will meet at 9 p.m. ET (8 CT) at Memorial Gymnasium.

TESS FROM LONG RANGE: Tess Darby went three of six from behind the arc against the Rebels. She has now hit 24 treys on the season, nine of which have come during SEC play. She is averaging 35.3 from distance on the season and is shooting 44.4 percent in conference games.

DARBY’S FREE THROW DEBUT: Sophomore Tess Darby went a perfect four of four from the free-throw line against Ole Miss. Prior to this contest she had never shot a free throw in a collegiate game, making her season and career average from the charity stripe 100 percent.

KEEPING OPPONENTS IN CHECK: The Rebels entered today’s contest with a field goal percentage of 43.9 percent but were held to just 33.9 percent shooting. The Lady Vols’ defense has kept all 16 opponents at 36 percent shooting or below this season, and through four SEC games Tennessee is holding opponents to just 28.3 percent from the floor.