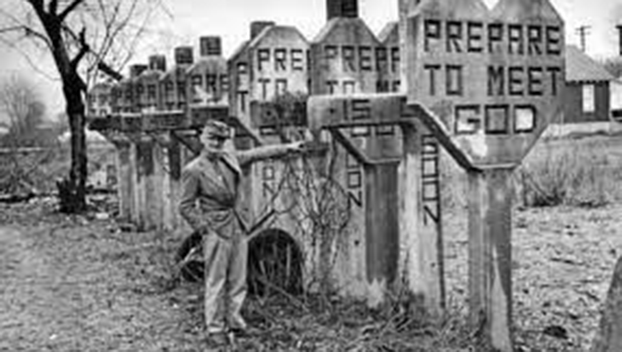 Harrison Mayes was born in Fork Ridge, in Claiborne County, Tennessee, on Feb. 8, 1898, and grew up like most other boys in eastern Tennessee. He was ‘saved’ at a tent revival in 1909 at age 11 and his life was changed forever.

Harrison Mayes studied the Bible and went on to spend his adult life being, perhaps, the most prolific ad-man for Jesus who ever lived. He began his life’s work by painting `Sin Not’ on the side of a black pig and proceeded to spend an estimated 60 percent of his life’s income in fulfilling his calling, his life’s work for Jesus.

“I heard a voice saying, `Come and follow me,’” Mayes said later in life.

He learned the value of a good work ethic while growing up at Fork Ridge and took a job as a coal miner in the same community like his father. Mining safety provisions were largely nonexistent or overlooked in that early era of mining. It wasn’t long before Harrison was nearly crushed to death in a mining accident. Hurt badly, he didn’t think he would survive.

“I promised the Lord that if He saved my life, I would spend the rest of it giving Him glory and telling others of His great work here on earth,” Mayes said later in life.

He survived and unlike many others was intent on keeping his promise to God.

“There are many different ways to serve the Lord,” Mayes said later on from his Middlesboro home. “I tried preaching but didn’t feel it was my calling. I tried running revival meetings and even tried going all over Florida and other places making music. I prayed and prayed asking for guidance from Lord God in Heaven.

“I never could make a go at nothing until I got into making my signs that pointed the way for others to get to Heaven. That was my calling. I’ll paint my signs and plant my crosses until everyone everywhere knows God and His healing power.”

Harrison was twenty years old and his wife, Lillie, was fifteen years of age when they married.

“He was going around and painting messages on rocks even then,” she said. “Others went around painting their names on rocks and bridges. My husband would leave here with a paintbrush and paint. He would paint `Jesus Saves’ or ‘Get Right with God’ or other messages, on rocks or other places. He also made signs and tacked them on telephone poles.”

Feeling he should do more and bigger things he began painting messages on billboards. He soon switched to putting the messages on four-foot by six-foot aluminum sheets so they would last.

“I put those in forty four states by myself,” Harrison said. “Then I began having tracts printed and I sent them to chaplains in the Army and to the ships during World War I and II. I had a hundred thousand tracts made up and sent.”

Harrison Mayes is probably best known for the heavy concrete crosses which are seen along many highways throughout the nation. Many of the 2,000 crosses are still intact where they were placed.

“I intended to make concrete signs and put them up around the capitals of each state,” the 123-pound Mayes explained. “I used to take four or five boys to help put the crosses up. They weighed about 1,400 pounds each.

“Later I put up many of the crosses by myself – just myself and the truck driver. I loaded them with a chain block one on top of another. We’d drive right to the place where I was going to put one up. All I had to do was to dig the hole with a posthole digger and in fifteen minutes I was ready to leave.”

With the truck braced to keep it in place Mayes pulled and wedged the concrete signs to the edge of the truck bed and tipped it right into the hole.

Many of his signs stretched across the sides of barns, some were written on slanted roofs and others spanned valleys.

“I’ve got 56,000 bottles spread throughout the world,” he said in an interview with writers from Foxfire. “There are twenty languages in the bottles. The University of Tennessee language department helped me with the translations. `Prepare to meet God’ is translated into fourteen languages. `Jesus is Coming Soon; Get Ready’ is translated into six languages.”

“I’m sending the bottles to missionaries in all parts of the earth to have them thrown into lakes, rivers and oceans,” he said. “God has helped me get these sacred messages in fifty states, eighty-two nations, on the seven seas, and in all the big rivers and lakes on earth.”

The Mayes home in Middlesboro was built in the shape of a cross and several concrete crosses stood in his yard for years.

Many are now on display in the Museum of Appalachia in Norris, TN along with many others items from his life. Harrison tried unsuccessfully to have NASA erect one of the concrete crosses on the moon.

Although Harrison Mayes passed away at the age of 88, on March 7, 1986, thousands of people are still touched by his creations.

Many of his signs still stand including a cross of lights, 140 feet tall and 60 feet wide, overlooking Middlesboro, Ky. from a nearby hillside. Mayes paid the electrical bill until late in life when it became too burdensome. An anonymous donor now keeps the cross lit.

Henry Harrison Mayes was an ordinary man but he had extraordinary faith and perseverance.

Jadon Gibson is a freelance writer from Harrogate, Tennessee. His stories are both historic and nostalgic in nature. Thanks to Lincoln Memorial University, Alice Lloyd College and the Museum of Appalachia for their assistance.