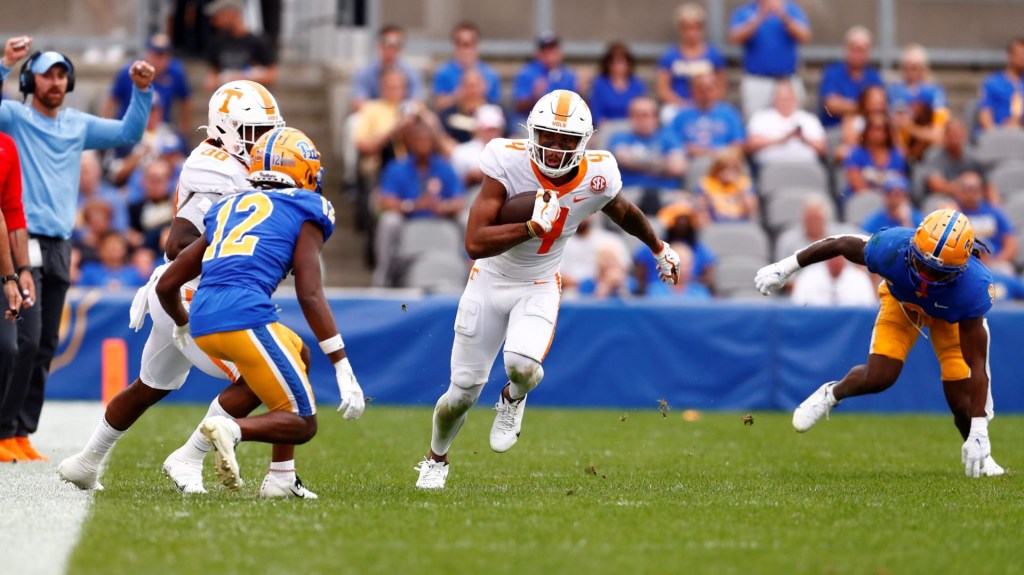 Tennessee quarterback Hendon Hooker found Cedric Tillman open in the end zone for a 28-yard touchdown in overtime, and the Volunteer defense came up with a stop as the 24th-ranked Volunteers took down No. 17 Pittsburgh on the road, 34-27, in the Johnny Majors Classic on Saturday.

Tennessee (2-0) improved to 14-9 all-time in overtime games, breaking a tie with Arkansas for the most overtime wins in NCAA history. The victory also marked Tennessee’s first road triumph over a top-20 non-conference foe since defeating No. 6 Miami (Fla.), 10-6, on Nov. 8, 2003.

The Vols have produced top-20 road wins in back-to-back seasons after knocking off No. 18 Kentucky, 45-42, last year in Lexington.

With the game knotted at 27-27 at the end of regulation, Pittsburgh (1-1) won the overtime coin toss and deferred. Facing 2nd and 13 after a holding penalty, Hooker fired a dart to Tillman for the game-clinching score. Chase McGrath knocked through his fourth PAT of the game to put the Vols ahead 34-27.

The Tennessee defense stymied the Panthers in overtime, headlined by a 12-yard sack from super senior safety Trevon Flowers on the game’s final third down. Facing fourth and goal from the 20 yard line, Pitt QB Nick Patti’s pass over the middle fell incomplete to seal the Volunteer victory.

Hooker completed 27 of 42 passes for 325 yards and two touchdowns with no interceptions. The redshirt senior from Greensboro, North Carolina, has a touchdown pass in 14 consecutive games, the second longest streak in program history, and posted the fourth 300-yard passing game of his career.

Tillman led all receivers with 162 yards on nine receptions, marking his sixth-career game with more than 100 yards receiving and the second-highest single-game receiving output for the fifth-year senior. Junior wideout Jalin Hyatt had a career-high and game-high 11 receptions for 73 yards, while redshirt junior receiver Bru McCoy pulled in his first touchdown as a Vol and finished the game with four catches for 58 yards.

Sophomore running back Jaylen Wright led the Vols on the ground with nine carries for a team-high 47 yards, while junior Jabari Small took 10 carries for 17 yards, including a pair of one-yard scores for his third-career multi-touchdown performance.

Senior linebacker Aaron Beasley tied his career-high with 14 total tackles to lead all players on Saturday, including a three-yard tackle for loss, his first career pass breakup and a career-high tying three quarterback hurries..

Pittsburgh tailback Israel Abanikanda carried the ball 25 times for 154 yards—including a breakaway 76-yard score in the first quarter. Starting quarterback Kedon Slovis was 14-of-24 for 195 yards, one touchdown and one interception before exiting the game at halftime due to injury. Patti played the entire second half and overtime, completing 9-of-20 passes for 79 yards and a touchdown.