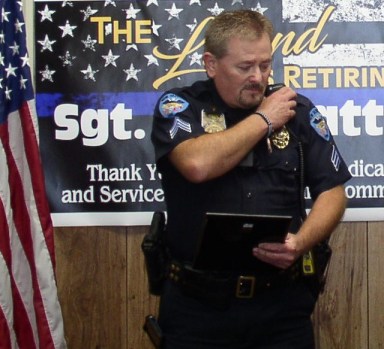 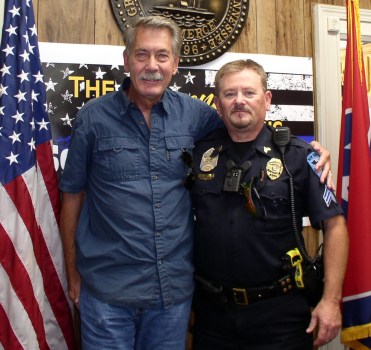 How do you say your final goodbye to 40 years of law enforcement service – 37 of which was spent defending the streets of New Tazewell.

Sgt. Mike Patton performed his last duty on Oct. 6, during an emotional farewell ceremony held at City Hall. The Sarge took his last official call from a dispatcher who wished him Godspeed and a restful retirement via police radio.

“…be it advised that, after four decades of service to the citizens of New Tazewell, Sgt. Mike Patton, badge #205, has ended his final shift,” said the dispatcher. “Sgt. Patton, you have been a friend to us all and a mentor to all over your years of service. Mike, enjoy your retirement and your next phase of life….. We will forever be grateful for your dedication and sacrifice that you have made to your community.”

The radio traffic was cleared by the dispatcher followed by several well wishes from officers in the field.

During the ceremony, Lt. Detective Gary Ruszkowski spoke of the decades of selfless service to community as Patton spent many long nights, weekends, swing-shifts and holidays protecting his city.

“Life as a law enforcement officer is not easy often having to put duty before your family,” said Ruszkowski. “We would like for you to think about all the lives that you have changed throughout the course of your career. This world needs more police officers like you. Thank you for all that you have done and the legacy that you have left for the next generation.

“No more lights and sirens, roaring engines or adrenalin dumps. We wish you just as much excitement in your retirement – but in a different type. You are a free man, no longer handcuffed to the job. You have done your hard time. You have served and protected for many years. Now, it’s your turn to be served and protected,” said Ruszkowski.

Patton began his law enforcement career at the Claiborne County Sheriff’s Office under Sheriff Billy Wayne Smith in March of 1981, moving to what would become his permanent station at the New Tazewell Police Department three years later.

The camaraderie between retired New Tazewell Chief of Police Johnny “Jay Jay” Johnson, under which Patton served, and the Sarge were evident as they swapped old “war stories” while waiting for the official ceremony to get underway.

During an interview, Patton said “it’s been a long time coming. I’m ready to go home – a lot of years.”