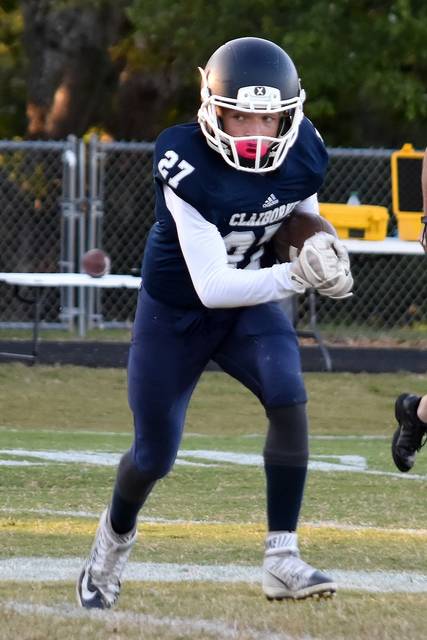 Jason Green did good work rushing the ball before he left the game due to a hurting shoulder.

The Claiborne Middle School football team welcomed the Lafollette Owls into town for a big divisional football game Sept. 7. The Bulldogs had a change of scenery as they moved play from R.O. Giles field to the Bulldogs field at Claiborne High. The Bulldogs handily defeated the Owls in the earlier jamboree but the Owls likely would not be an easy win on this night.

Lafollette went four and out on their first possession and the Bulldogs fumbled on theirs. The Bulldogs defense bent but didn’t break and forced a punt but not before the first quarter had ended. Tied at 0-0 the Bulldogs started their next drive on the 17. The drive went nowhere and the Bulldogs punted back to the Owls who took over on their own 40. The Owls offense struggled to gain yards and had to punt to the Bulldogs at 3:51.

A good punt return set up the first Bulldogs score of the night. Jason Green almost ran the punt back but on the next play Logan Daniels went 27 yards on the ground to break the 0-0 tie. After the conversion by Walker Ray the Bulldogs led 8-0. The Bulldogs then went for and recovered the onside kick and had the ball on the Owls 38 to start their next drive. This drive was a disaster for the Bulldogs as they turned it over on downs to the Owls. At 1:47, Daniels had a pick six and scored the Bulldogs 14th point. The conversion failed and the Bulldogs led 14-0 with 1:46 left in the half. The Owls had one last chance to put points on the board but failed and had to punt.

Daniels threw the ball to Isaac Lester for what seemed to be one last score before the half. The conversion failed and the Bulldogs led 20-0; however, the Bulldogs kicked it short and got the recovery with 25 seconds left. Daniels and Lester then hooked up for another score and at the half the home team led 28-0 after the conversion by Ray.

Leading 28-0, the Bulldogs needed to keep the momentum up and the Bulldogs received the ball to start the third but turned it over on downs killing their momentum. The visiting Owls returned the favor and the Bulldogs had the ball again, this time on the Owls’ 40. Daniels passed for a first down and moved the chains.

The Bulldogs got the ball back and had one play before the third quarter ended. Daniels and Lester hooked up for the third time at the 6:30 mark of the fourth for a 60 yard TD. The conversion failed but the Bulldogs led 34-0. On defense Daniels got his second pick six of the night going 70 yards to find pay dirt. The PAT was no good and the home team led 40-0. The Owls scored on the final play of the game to make the score 40-6.

The Bulldogs got the win and stayed undefeated. Their next game was scheduled for Sept. 12 versus The King’s Academy.