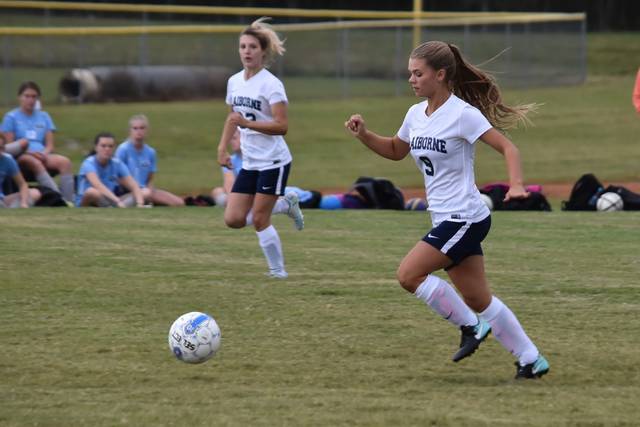 Macie Sumner gets a good look at the goal during the first half.

Claiborne was coming off a great win against Grainger and would like nothing better than to ride the momentum; however, the Lady Eagles were no easy path to travel. During the first portion of the game the Lady Bulldogs were reacting to and playing the Lady Eagles’ type of soccer. The Bulldogs were lucky to survive attack after attack on their goal while all the time seemingly struggling to get their own offense on track.

Gibbs kicked in two goals before the half but the Lady Bulldogs were playing hard enough that they felt like they were still in the game. Claiborne needed that one goal to go in but sadly it didn’t. The Lady Bulldogs fans watched Gibbs score twice more during the second half to blank the home team 4-0.

Although CHS head coach Jeff Sorke didn’t see his team score a goal but he was overall pleased with their effort, “We competed well but didn’t finish our opportunities. If we just get rid of the ball quicker here or there this would have been a different game. Proud of the fight in the team.”

Despite the setback, the Lady Bulldogs are changing the culture to where they expect to compete with anyone out on the pitch and that’s a big step for a program that continues to build.