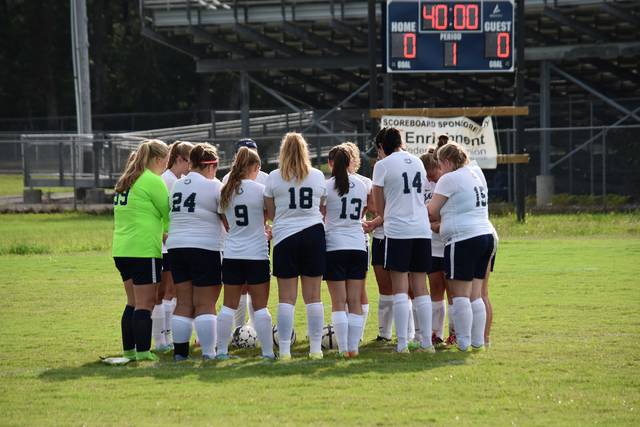 The Claiborne High School girls’ soccer team gathers together before a game.

Claiborne Lady Bulldogs soccer team had been looking for that one big win to announce their arrival and September 7 may have been it. They traveled to Grainger County and brought home the big 5-3 win.

Coach Jeff Sorke has made a difference in the team in just a few months and when asked about the win he said, “Well obviously it was a big win for us being the first win over Grainger in program history. I thought we played well I actually think we would could have scored more goals. Probably the two most important things that factored into the win were our passing and our communication. We kept the ball on the floor really well and our forwards were making excellent runs and the midfielders and other forwards were just connecting some really good passes while at the same time our counterattack was on fire.”

Sorke went on to say, “I did a little bit of tweaking with the lineup and switched a couple of people around and it paid off; Anna Lovin had two goals, Macie Sumner also had two goals and Cydny Grimm scored off of a great service from Ruthie Sorke on a corner kick. The defense kind of spread apart and she found herself wide open and just stuck her foot out to make contact with the ball. It went off the inside and went into the corner of the goal and there was nothing that their goalkeeper could do about it; was a great shot. Once again Courtney Daniels had a big game in goal and saved us some embarrassing moments on three or four occasions with really big saves.”

Sorke added, “We are growing and we’re learning and we’ve got several district games coming up in the next couple of weeks that are going to determine our position for the tournament.”