Panthers hang with Oneida but fall 34-20 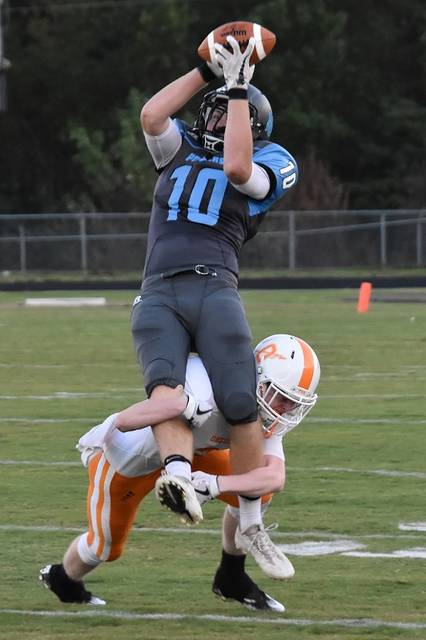 Jacob Bullins rises up strong and comes down with the ball. He ended up being taken out of the game with a broken arm.

Cumberland Gap High School played host to the powerful Oneida Indians football team Sept. 15. The temperatures were hovering around 80 degrees as the two teams and their fans were arriving but unlike previous days this week, there was no rain.

The Panthers were dedicated to stopping the Indians potent running game and that was one of the keys according to Panther’s coach DeLynn Cline, “They are going to come and go right at us, there’s no secrets. It is a battle of will tonight they are big and strong and for us to do well, we have to stop the run.”

“Offensively, it is more of the same, they are big and strong up front so we likely won’t be able to run inside. We will spread them out and use our speed,” Cline said.

Oneida was on their heels during the Panthers opening drive and it looked like the home team was going to put points up first. The Panthers completed a pass to Jacob Bullins who rose high in the air and unfortunately fell down on his arm but came down with the ball. His injury forced him to leave the game and was immediately sent for X-rays. The home team later scored their first touchdown on a Brady Pearman reception thrown on point by Caden Brunsma.

Oneida ran the ball efficiently and placed three scores on the board during the opening half. Leading 21-7 the two teams both had drives going just before the half ended but neither were able to break the goal line for additional points.

Oneida received the ball to start the second half and had a 21-7 lead to work with. Kaleb Franklin, Matthew Muggridge and others were playing good defense but the Indians scored again to lead 27-7.

Upton did the bulk of the work to start the next Panther drive and then Muggridge started to find holes in the middle of the field. The Panthers missed a sure TD at 4:55 when the ball slipped through a receiver’s gloves and drawing a collective groan from the stands when the ball hit the grass. Pearman made another clutch reception on a fourth and four to move the chains. The Panthers were at the four yard line and were facing another fourth down. Muggridge blasted through the line and into the end zone. After the PAT by Nich Neverstitch the score was 27-14. The Indians had three plays on offense before the third quarter ended 27-14.

The first play of the fourth quarter was a punt by Oneida. Peyton Welch made some big plays on the next Panthers drive that ended with a TD by Gage Ellison. The PAT was no good and the Panthers were behind by only seven points at 27-20. Oneida had to answer the score and did by running right up the middle. With 3:06 left in the game the score was 34-20.

The Panthers had one more drive but we’re not able to advance the ball. They turned the ball over on downs and Oneida ran the time off the clock. The final score was 34-20.

The Panthers played hard and put a scare into an Indians team that is consistently hard to beat. The next game for the Panthers is a non-region game at Pineville. The Panthers team and fans would like to wish Bullins a speedy recovery after undergoing successful surgery to repair his broken arm.