Thumbs down on PESG contract 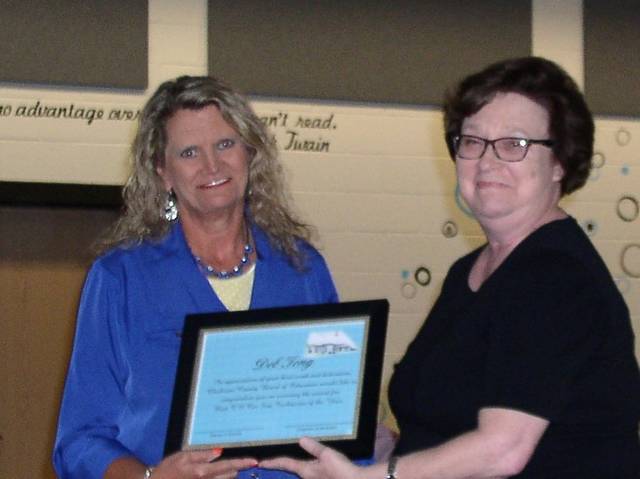 Deb Tong, left, received a plaque of appreciation for earning the East Tennessee Car Seat Technician of the Year award. Also shown is Joanne Wells, who presented the plaque to Tong.

After a month spent gleaning comments from their constituents, the Claiborne School Board decided last week to give the ‘thumbs down’ to a contract that would have taken much of the work out of finding and routing qualified substitute teachers to the various school system campuses, as needed.

“Our focus is to help the substitutes. You are the bridge between the teacher and the student. Because you’re there, education continues,” said Woodson, during her presentation last month.

Board member Wade Breeding made a motion to remove the matter from the table, which created a bit of confusion with his fellow members. Instead of moving forward with a vote, the matter seemed to be dropped and the next item on the agenda was addressed.

Later in the meeting, Breeding asked that the PESG contract be revisited. After consulting county attorney James Estep III about the legalities of the request, the board moved into a discussion and vote.

Board member Shane Bunch said that, while the program seems to be a good one, he and his constituents feel that the money would be better spent “where the rubber meets the road.”

Bunch did not rule out the possibility of contracting with PESG in the future, when the money to do so is available.

Dr. Joseph Miller, director of schools, questioned whether the current cost to the budget is ‘worth it.’

He cautioned the board that the budget is now nearly ‘neutral.’

Vice-chairman Shannon England said she felt there was no question the service would benefit the school system.

“But, it comes at a cost which is not in our budget. We’ve heard from our communities and our principals that they would rather have the money to spend on something else instead of spending the money on a substitute program. I just don’t think the time is right,” said England.

The board voted unanimously to forego the program, at this time.

The members thanked Woodson for the amount of time she spent to present the program to those on the board.

In other action, the board approved a survey for the Centerstone Teen Pregnancy Prevention program, which is taught in 40 counties across the state. According to its literature, the program teaches abstinence only and is compliant with Tennessee law.

Just some of the group lessons include avoidance of ‘risky situations,’ developing ‘refusal skills,’ setting limits through self-discipline and the consequences of teen pregnancy. The program also covers medically accurate information about sexually transmitted diseases and HIV.

Peer pressure skill sets are normally taught the last day of the program.

Parental permission will be obtained for students to participate in an anonymous survey to determine program effectiveness.

In another matter, the board voted in favor of the Elgin Dental Screening Program for kindergarten through sixth grades. Approximately 80 percent of the students in this age bracket were screened last year. Some 280 of those students were given treatment through the program.

Miller presented The Alpha School with the attendance award for the month of August. The school earned over a 99 percentage rate, he said.

Every school in the system earned a 94 percent, or higher, rate for the month.

The board approved Brittany Daniels as a volunteer to sponsor a dance team at Tazewell-New Tazewell Primary.

Jeslyn Wolfe was cleared to work as a volunteer with the Springdale Elementary cheerleader coach.

During the opening moments of the meeting, the board voted Micheal Jo Gray and Shannon England as the new chairman and vice-chairman, respectively, for the 2017-18 school year.