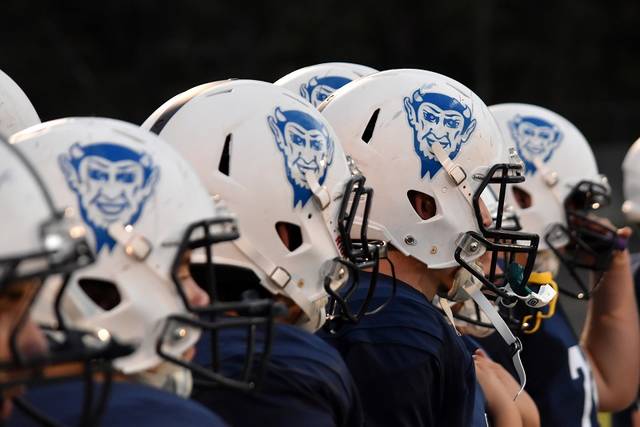 The Blue Devil was proudly displayed by CHS players.

With the opening of two new high schools in New Tazewell and Speedwell, the Claiborne County High School Blue Devils became the Claiborne High School Bulldogs and the Blue Devils were history. The fans Friday night simply enjoyed the game and reconnected with friends, making the atmosphere one of the best ever at the current high school. The Blue Devils — former students and athletes — were acknowledged during halftime of the much-touted “throwback” game.

The Bulldogs needed to play some gritty football and play Oliver Springs with determination and focus. They could not let this game which was believed to be winnable get away.

The Bobcats started the game with the football and drove the ball into Blue Devils territory where they faced a fourth and three. In what would be a theme of the night the pesky Blue Devils defense rose up and made a big stop.

Elijah Beason started the game under center and along with Bryce Laws, Greg Goins and Storm Livesay led the Devils to the first score of the game at the 3:29 mark. Laws ran 21 yards for the score. Grayson Howard’s PAT was blocked but yet the home fans were delighted to have the lead early.

The Bobcats were driving when the second quarter began and were down on the goal line looking to score. The Devils forced a fourth and goal and then stuffed the runner on the one hoping they had prevented a first down. After a measurement and a first down the Bobcats scored at 9:47 on a one yard run by B. Cross. Zack Brooks kicked the PAT through to lead 7-6.

At the half, the Devils were behind 10-6 and needed to get the offense on track.

Beason moved back to the running back position handing the QB position back to a hungry Eli Stone.

The Blue Devils defense kept playing game saving football. They made great play after great play and looked like a unit that were coming together. The offenses both struggled to finish drives during the third quarter and it wasn’t until the 1:11 mark of the fourth quarter that the scoreboard changed. The Devils’ Laws scored on a three yard run. The conversion attempt failed but the home team had came back to lead 12-10.

Once again the defense of the Devils had to step up and they did just that to secure the win. The Blue Devils fans stood up and celebrated the hard earned 12-10 victory.

Laws led Claiborne in rushing with 64 yards while Hunter Rosenbalm led the team in receiving yards with 11.

After the game Claiborne head coach Nathan Medlin had only great things to say about his defense, “We picked it up on defense and made the plays when needed. They were outstanding.”

Medlin gave credit to the offense for the winning drive but saw many areas of improvement, “We made too many mistakes tonight on offense and had a few issues with our line but give credit to our running backs for stepping up when they had to.”

Claiborne’s record is now 3-3 but are still winless in conference play. The Bulldogs will travel to Johnson County Sept. 29 to battle a 5-5 Longhorns team ranked highly in the state polls.