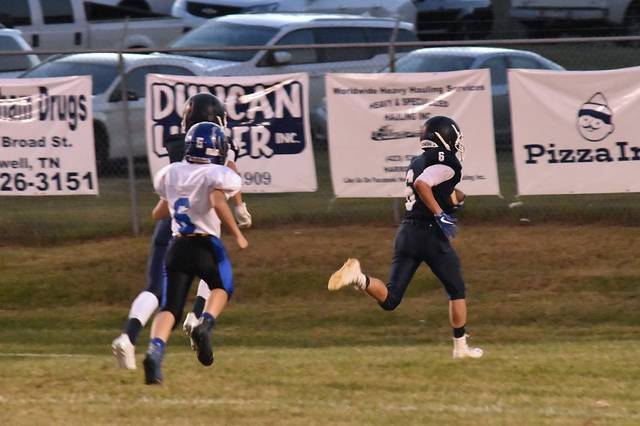 Isaac Lester takes the tipped ball for the score.

It was a meeting of undefeated teams Sept. 21 when the Claiborne Middle School Bulldogs and the Jacksboro Eagles faced off at R.O. Giles field. This was a game that Claiborne needed to win to establish themselves as one of the powerhouse programs in local middle school football, but it would not be an easy task as Jacksboro was already known for being one of the top programs. Both teams have great athletes but Claiborne lacked the depth and it showed as the game progressed.

Before the kickoff, Claiborne celebrated its eighth grade football players and cheerleaders. With all the festivities behind them it was time to play the game.

Eagles returned the kickoff deep into Bulldogs territory and then were faced with a third down and three. They moved the chains with three consecutive first downs on the way to their first TD to lead 6-0 with 3:35 left in the first quarter. The conversion failed. The Eagles then went for an onside kick and recovered. They moved the ball down the field and scored with two seconds left in the first quarter. The Bulldogs defense denied the two point try again and the Eagles led 12-0. The first quarter ended during the ensuing kick return.

The Bulldogs had the ball to begin their first drive on their own 38. They were driving the ball well and was on their way to the end zone but an intercepted pass on fourth down ended the drive.

The Eagles started their next drive on the Bulldogs 30. On third down, the Eagles passed for their third score at 4:10. The two point conversion pass was wide open and the Eagles extended their lead to 20-0. The Eagles kicked the ball onside again and recovered but the Bulldogs defense held.

On offense, a Logan Daniels pass was tipped and then taken from the air by Isaac Lester for six. The conversion was good but a flag was thrown on the field that represented a Bulldog holding penalty. Backed up five yards, the Bulldogs tried again but was just shy making the score 20-6.

The Bulldogs tried an onside kick and the Eagles jumped on it. The Bulldogs defense was playing well and then the visitors broke a play to the sidelines. Daniels injured his lower leg on the tackle and had to leave the game with just 40 seconds remaining in the half. They scored again this time with 16 seconds left. The conversion was ran in and the Eagles led 28-6.

The Bulldogs received the kickoff but we’re ready to just head into the locker room down 28-6.

The Bulldogs received to begin the third quarter but threw an interception at 6:53. The Eagles struggled through penalties to have the ball on the Bulldogs two. They fumbled on the goal line and the Bulldogs recovered. The offense went back on the field without Lester and Jason Green due to injuries but Lester returned at the 3:01 mark of the third quarter. The Bulldogs threw a pick six and the Eagles led 36-6. The Eagles didn’t kick it long but we’re still able to recover the ball and set up their offense on the Bulldogs 39-yard line. Instead of running the ball and counting off the clock the Eagles kept throwing the ball trying to score and did just that with 14 seconds remaining in the third quarter. They ran in the two-point conversion to lead 44-6. It was as if they were making a statement of sorts.

The home team returned the next kickoff to their own 40 as the third quarter came to an end, 44-6.

The Bulldogs coaches went for the deep shot and it was defended well and intercepted at the Bulldogs 31. The Eagles finally matched the Bulldogs by putting in their second team and they broke a run down the Bulldogs sideline for another TD. After the conversion Jacksboro led 52-6 and the officials went with a non-stop clock.

The game ended 52-6 and Claiborne had recorded its first loss of the season.