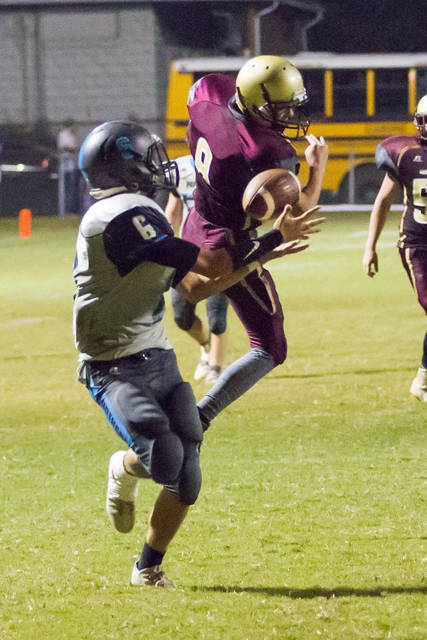 The Cumberland Gap Panthers made the trip to Pineville, Kentucky, Sept. 22 to play the Pineville Mountain Lions in non-conference play.

Pineville was hosting its homecoming game. The Mountain Lions received the opening kick and went right down the field aided by some timely penalties. After holding the Lions to a fourth and seven Pineville decided to go for the first down. The Panthers received a holding penalty which made it fourth and two. Simpson for Pineville carried for a first down and had his team facing a first goal. With 4:55 to go in the first quarter Matt Golden scored from the four. The two point conversion no good and the score was 6-0.

On the ensuing kickoff, Jayson Upton returned 52 yards to put the Panthers in Lions territory. On the second play of the drive Caden Brunsma threw an interception. The penalty count was going up against the Panthers even as the game was in its early stages.

The Panthers held the Lions on their next drive due to a big sack by Keaton Cornett and Trey Turner which forced a punt that allowed the Gap to begin their drive on the Lions’ 37-yard line. Matthew Muggridge carried the football multiple downs to the 6-yard line of the Lions just as the quarter was ending.

The Panthers faced a third and goal from the four just after the second quarter began. Muggridge got the call again and stormed into the end zone. The PAT was no good and the game was tied at six. On Pineville’s next possession, Golden had a big gain of 26 yards but on the next play the Miles Cole came up big with a tackle for loss of six yards. Pineville was forced to punt.

On the first down of the Panthers drive, Brunsma hit Brady Pearman for a 28-yard gain through the air. With 3:16 to go and on second down Brunsma hit Welch for a 58 yard TD pass. The PAT was good by Neverstitch and the score was now 13-6 Panthers.

Pineville went three and out and punted to the Gap who started their next drive on the Pineville 48. After a delay of game penalty and then a holding penalty the visitors were backed up to their own 37. On a third and 11 Brunsma hit Muggridge for a 13-yard pass play. With 29 seconds left in the half, Brunsma hit Gage Ellison for a 30 yard TD pass. The PAT by Neverstitch was good and at the half the Panthers led 20-6.

Pineville attempted a onside kick to start the third quarter but Brady Pearman scooped and secured the ball. The yellows continued falling on the visiting team with two holding penalties and then a unsportsmanlike penalty which forced them to punt. After the punt Pineville started on their own 36. With 6:07 to go in third Gage Ellison picked off former Panther QB Garland Ellis’ pass and returned it 33 yards for a Panther defensive TD. The PAT was blocked to make the score 26-6 in favor of the Panthers.

On the next Pineville possession, Braxton Daniels recovered an Ellis fumble on a fourth down and two at the Lions’ 17-yard line. Brunsma then carried the football off left tackle for a first down. Shortly after, Muggridge carried four yards for the next TD. The PAT was no good and the Panthers extended the lead out to 32-6.

During the final period the Lions scored once more and the Panthers got their reserves some playing time but the final score of the game was in favor of the visitors at 32-12. Panthers fans left astounded at the number of penalty flags but were pleased to get the win.

Information provided by Jamie Lake. Reach Allen Earl at 423-254-5588 or on Twitter @pitchadude.