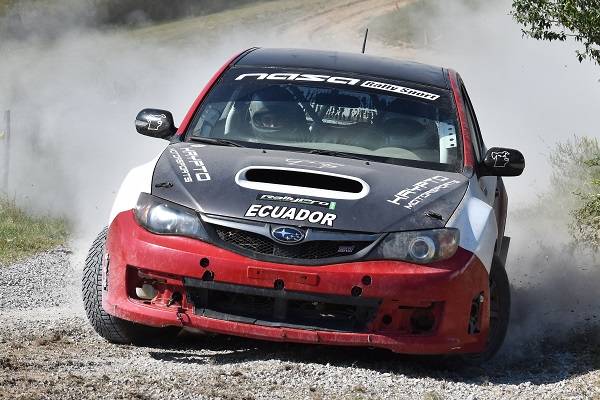 Marcel Ciascai was smooth and fast in his Subaru.

The National Auto Sport Association (NASA) Eastern Tennessee RallySprint held its inaugural event at Frazier’s Motorsports Park (FMP) in Tazewell on Sept. 23. NASA is the premiere rally association in the United States and Canada. Drivers from several states drove as many as 11 hours to attend and participate in this event.

The vehicles of the first RallySprint event in the Claiborne County area were very diverse just like the drivers. The vehicles included a Porsche, Audi, Subaru, rally prepared motorcycle, rally prepared side by side and more. The course was fast and challenging, It twisted through grass, over gravel and dirt surfaces and had many elevation changes. It covered two miles in totality. Lester Dickerman was the overall fastest driver of the day during the multi-run competition.

Local rally driver and event organizer Matt Earl drove his Ford Escort rally machine to its limit and beyond. He was sitting in the top five overall until the last three runs of the morning session. Earl pushed the Ford over its limit and destroyed the stock block four cylinder engine in a puff of smoke and flames. His event was over but again he had more seat time behind the wheel as well as having a great time.

Andres Green helped direct the event and had this to say about the East Tennessee area, “This is a gorgeous part of the state and the world for that matter. I am from North Carolina near Raleigh and it’s flat and boring. The terrain in this part of Tennessee is fantastic. What makes a good rally course is elevation and the right geology which is found here.”

Green went on to speak of future NASA events at FMP, “I know we do not have large numbers here today but we will use this to find out how the course will work and get a few runs under our belts before we can consider adding it to our yearly championship. Rally is traditionally a sport where driving long distances is normal. Typically these courses will feature us to close a road and it’s not something that is easy to do. You can’t ask them to do this every weekend so each rally generally happens once a year.”

When asked if this rally becomes a regular part of the championship run next year how many vehicles could the area expect to see he said, “I can easily see 20-30 coming out to participate.”

One driver, Ryan Holdbaur, went through more than others just to get to FMP. He was on his way and two hours into the drive when he noticed a horrible sound coming from underneath his tow rig. Realizing the truck had limited miles remaining he turned around and made it back to his work where he and his crew unloaded the truck and put the essentials into the rally car which happens to be licensed and insured per rally car rules for on-road use and they made the four and a half hour drive without further issues.

FMP has come a long way in just a little time. The venue began with a few cars at a rally cross and has now brought in what some say is the best rally car association to help promote the sport in the East Tennessee area. Food items were provided by Off the Hitch Grill.