A changing of the guard 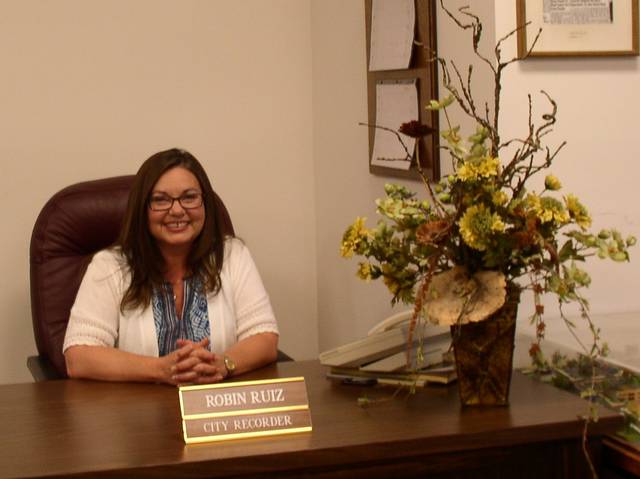 Robin Ruiz, the new Tazewell city recorder, tries out the desk she will be using inside the conference room at City Hall, when the Tazewell Board of Mayor and Aldermen meets each month.

Members of government and other well-wishers gathered inside the conference room at Tazewell City Hall Thursday evening to witness the final farewell of city recorder Diane Widner and the claiming of the pen by Robin Ruiz, the new recorder.

Widner spent the last 10 1/2 years jotting down city business during meetings, garnering grant funds through her writing and generally keeping the city moving smoothly via her dual roles as city recorder and certified municipal finance officer.

She has worked under four mayors during her tenure. An assortment of dedicated men and women has graced the seats of the city council, as well. In fact, Widner says Betsy Shoffner is the only original alderman to remain on the board.

“It’s time for me to retire. I’ll miss the people I’ve worked with and the residents I’ve come to know during my time here. I’m happy, with this decision. This is what I need,” said Widner.

Widner has sold her home in Tazewell and has moved to Clinton, to be near her daughter.

She says she will be returning to her old stomping grounds to visit family and friends.

As for the new city recorder, Widner predicts an easy transition.

With some 15 years of accounting experience, Ruiz says she looks forward to using her financing skills in her new job. The prior director of the Claiborne Economic & Community Development Office was given ample opportunity to use her skills as a grant writer and an ‘all-around’ jack of all trades.

Ruiz says she looks forward to working with city government.

“I’m grateful the council voted me in,” said Ruiz.

While performing her regular duties as the new city recorder, Ruiz will be completing 11 classes geared towards certifying her as the Tazewell CMFO, as well. She is currently the designee-certified municipal finance officer.

At least 50 killed as gunman opens fire at…