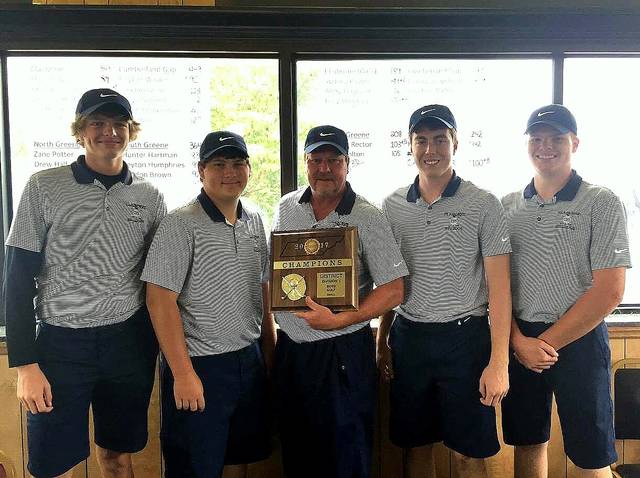 The Claiborne High School Bulldog golf programs began their 2017-2018 season with speculation as they dealt with a restructure from the TSSAA that put them in district and regional play against unfamiliar schools. The newly-formed district held their coaches meeting in March and coaches Mike Poore and Scott Payne knew this season had some uncertainty. It was midway through the season before things started to become clear. The CHS golf programs were in for a tough battle if they were going to finish in first place in their new district.

The Lady Bulldogs had just as tough of a battle to begin their season. Not knowing the level of competition they faced coach Payne set goals for the girls to reach concerning their individual scores. Several weeks into the season, the Lady Bulldogs had posted wins against all the district schools, although the wins over North Greene and Cumberland Gap were very close. It was then apparent the district tournament would be a shoot out to see who would take the overall win.

On Sept. 11, the district tournament was held at Clinchview Golf Course in Bean Station and the stage was set for a showdown to crown the district champions. Claiborne High was the host school and coaches Payne and Poore served as tournament directors. Watching the weather closely leading up to Monday due to Hurricane Irma, they made the decision to continue as planned. Conditions were far from ideal. With cooler temperatures, gusty winds and rain in the forecast the first groups of golfers teed off at 8:30 a.m. to begin a tough day of competition. The general consensus among the coaches was overall scores would be higher due to the strong winds being pushed in from Hurricane Irma. As groups were beginning to come in to the scoring area, players, coaches, parents, and spectators watched with anticipation and kept their eyes on the scoreboard. Group by group, the scores were being tallied and posted for everyone to see. When all the scoring was finished, the Claiborne High School boys and girls golf teams were 2017 district champions. The boys had won the district tournament with a 15 stroke advantage over second place South Greene and the girls had become district champions with an eight stroke advantage over second place Cumberland Gap High School. CHS boy’s team members are Stone Payne, Michael Clark, Grayson Howard and Rhett Torbett.

Poore stated, “This win today has been four years in the making. These boys have played together since they were freshman and worked and improved for three years with the thoughts of being district winners, and today they made it happen,”

Clark, Stone Payne and Torbett are seniors and will be graduating in May 2018. The Lady Bulldogs have one senior, Abby Ferguson, who will also graduate. CHS girl’s team members playing in the district tournament were Sydney Payne, Ferguson and Lucy Shockley. Rounding out the full girl’s team are Hayley Holt and Clarissa Trent.

On Sept. 18, the Bulldogs and Lady Bulldogs golf teams traveled to Elizabethton Golf Course to compete in the TSSAA Region 1 tournament knowing it would be tough competition and they had a good chance to be at the top of the leader board. The CHS teams teed off with hopes of becoming region champions. After nine holes of play, the scores showed it was going to be a close finish between the boys of Claiborne High, University High and South Greene.

Claiborne High’s Clark received fourth place medalist and advanced to the TSSAA State Golf Championship as an individual. The state tournament was held at Willowbrook Golf Course in Manchester Sept. 26-27. Clark struggled the first day but came on strong on day two to finish tied for 28 out of 60 players.