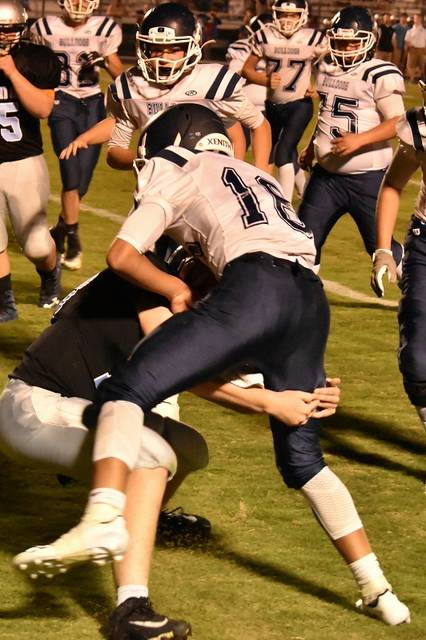 Logan Daniels fights through tacklers and scores for the Bulldogs.

“Instant classic” is a term often overused in sports today but if you were a fan in the stands of the Cumberland Gap middle school versus Claiborne middle school football game you would probably agree. This game was special as two teams battled through regulation and into two overtime periods before the winner emerged.

Claiborne came in with a winning streak of five games and the Panthers were ready to start one of their own. Isaac Lester made the first big play of the game for the Bulldogs with an interception but the Panthers defense ended the Bulldogs drive. After the teams went back and forth with punts the first quarter ended in a scoreless tie.

Dylan Ellison started a huge game by intercepting a Bulldogs pass as the second got underway. The Panthers were driving but the Bulldogs defense held on a fourth down at the 3:57 mark and one play later they fumbled the ball giving it back to the Panthers on the 17-yard line. The Panthers then surprised the Bulldogs on a fourth and long with a QB draw that set the Panthers up with a first and goal in the red zone. The Bulldogs defense rose up and stopped the Panthers drive giving the ball back to their offense with just seconds left in the first half. The Bulldogs tried three plays but were happy to go into the locker room with a scoreless tie. Both cheer teams took the field and did routines during the break.

The kickoff to the Panthers was muffed and then fumbled. The Bulldogs were fortune to find the ball and recover. Still, the Bulldogs offense struggled but were finally moving the ball after a pass to Walker Ray. Logan Daniels scored on a nine-yard run at the 4:26 mark of the third. The conversion failed but the Bulldogs led 6-0.

A good Panthers return set them on up on the Bulldogs 37-yard line. Challen Massengill made a play to stop the Panthers on a run but one play later they were able to get the first down. Eli Monday was also playing well on defense but Owens could gain big yards up the middle seemingly at will. With a first down and goal the Panthers scored on a pitch to Ellison. The conversion failed and the score was tied at six.

The two teams failed to score as the regulation clock ticked down to zeros but the Bulldogs were close as they dropped what looked to be a sure TD reception with 33.7 seconds left. Another TD catch was called back due to penalty.

The Bulldogs scored with Ray and they had a chance to win if they could convert the two point try. Ellison continued his huge game by making the play for the Panthers by intercepting the Bulldogs pass.

The Bulldogs now had the ball first during the second overtime. Daniels scored from eight yards out setting up the all important conversion. Ellison picked this try off as well and gave the Panthers hope of a win if they scored and made their conversion attempt. The Bulldogs defense stepped up and James Satkowski made a huge tackle on a toss play that had been hurting his team all game long. The Panthers recovered from the negative play and had the ball on the five yard line but again the Bulldogs defense made the play when they had to and stopped the Panthers short of the goal line and by doing so won the game 18-12.

Following the epic game Bulldogs Head Coach Asher Noe said, “I don’t know how you can get any more exciting than to win a double overtime game against your rival on the road. I can’t handle many of those. We had some mistakes early but overall I feel our defense played pretty well. They dug down deep tonight to get this win because in overtime it seems to be who wants it more.”

This was a game in which both teams refused to lose and both teams had the respect of fans as they exited the gates.