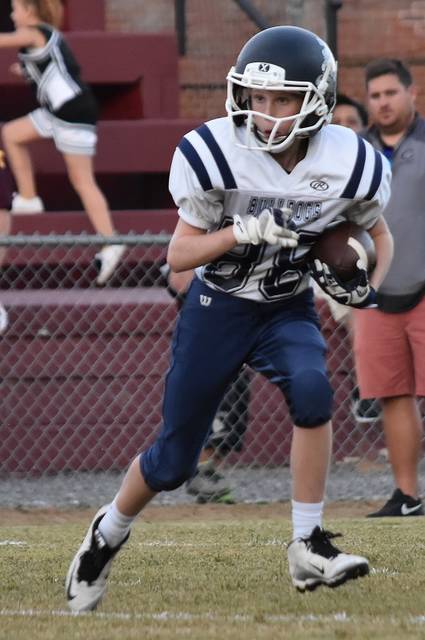 The Claiborne Middle School Bulldogs loaded the bus and traveled 1 1/2 hours to play football against Norwood Oct. 5. It was a non-district game for the Bulldogs, who were fresh off a win against their rival Cumberland Gap Middle School. The Jaguars came in as a one-win team but the Bulldogs could not get caught looking past them. The weather was great at Ed Kelley Memorial field when the two teams took the field.

The Bulldogs received the opening kick and Logan Daniels got the offense going by rushing 24 yards. The Bulldogs then handed the ball to Garrett Walker, who ran 21 yards for the game’s opening score. Walker then completed the two-point conversion to give the Bulldogs an 8-0 lead.

The Jaguars then settled down on the kickoff to secure the football and went on offense at their own 42. The Bulldogs defense made their first stop of the game and forced a punt. Just a few plays after the punt, Daniels reached the end zone on a 42 yard TD run and the Bulldogs allowed Eli Monday the chance to try the extra point. A young Jag was able to block the kick but he struggled to get back up and needed a moment to collect some air after the ball blasted him in the midsection. Claiborne led 14-0. The first quarter came to an end with the Jags on offense.

The Jags then fumbled the ball and the Bulldogs recovered. It didn’t hurt the home team as the Bulldogs drive ended with a turnover in downs.

The Jags got the ball first during the second half but were faced with a fourth and 12. They tried a fake punt but the Bulldogs were ready and stopped the play. Garrett Walker and Daniels combined efforts to lead the team to their next score. A three yard TD run by Daniels increased the score to 26-0 and with a good conversion try the score was increased to 28-0.

Daniels got his third TD later in the fourth period with a 60-yard run that was full of just pure talent as he dodged defenders the entire length of the run. Monday was called into action again to try the extra point and he blasted it high and through the uprights.

The score was increased to 35-0 and that was the final score. The Bulldogs now are 6-2 overall and will play their first playoff game Oct. 12 when they travel down the road to battle the Red Devils of Horace Maynard.