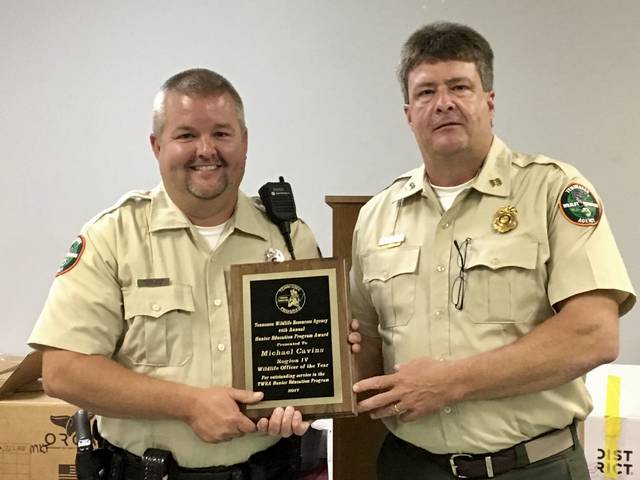 Claiborne County’s Michael Cavins, left, was a recipient of an award from the Tennessee Wildlife Resources Agency at a recent banquet.

Claiborne County’s Michael Cavins was a recipient of an award from the Tennessee Wildlife Resources Agency at its recent 43rd Annual Hunter Education Banquet.

Annual awards were presented to individuals for their contributions to the Tennessee Hunter Safety Program.

The TWRA annually presents the awards to volunteers, TWRA employees, and teachers for their efforts with the program. In addition, special awards for the Hunter Education Instructor of the Year, Outreach Volunteer of the Year and the Hall of Fame induction are presented.

Cavins has been with TWRA since May 2009. He started as a part-time boating officer and in 2010 was hired as a full-time wildlife officer.

“In 2012, I was assigned to Claiborne County as my primary assignment as a wildlife officer,” he said.

Cavins said he is “humbly honored to have been chosen as the Region IV recipient of the annual Wildlife Officer Hunter Education Instructor of the year award.”

“The hunter education program was designed to reduce the number of hunting related incidents by introducing young hunters to safe and responsible hunting. I teach a class each spring and fall every year to the young hunters of Claiborne County. I am always amazed by the response of young participants who choose to come out four nights a week to learn basic firearm safety and ethical hunting practices,” he said. “I enjoy sharing my experiences and knowledge of wildlife and the great outdoors with the youth and in return, I enjoy listening and interacting with the students about their hunting experiences. In reality, my award is earned when I see the look of excitement on their smiling faces after the successful completion of the hunter education class at the end of the week.”

Other Region IV award recipients included Stanley Shell, Volunteer of the Year and Chuck McLain, Teacher of the Year.

The Hunter Education Hall of Fame inductee was Sam Venable of Knoxville. He was also recognized at the September meeting of the Tennessee Fish and Wildlife Commission meeting.

A new face at the shelter