To generate or not 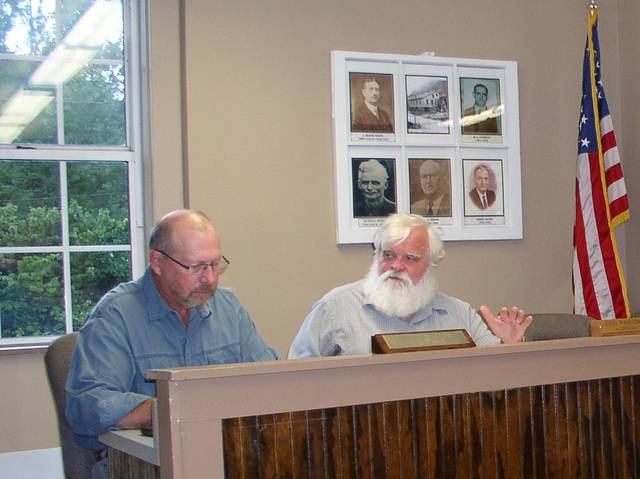 Aldermen Phillip Waller and John Ravnum discuss town business during the regular monthly meeting of the Cumberland Gap Board of Mayor and Aldermen.

Cumberland Gap officials will need to weigh the benefit of pulling funds from the depreciation account to replace the town generator or face a less-than-pristine annual budget audit, come next year.

Alderman Chuck Coffey addressed the issue last week, during the October meeting of the Gap board of Mayor and Aldermen (BMA).

“It’s not like buying an extra or luxury, or anything. It’s a have-to-have piece of equipment,” said Coffey.

Mayor Neal Pucciarelli said he had researched the matter.

“I think what we need to do is to put it on the budget, for next year. That’s going to be the most effective way to keep us from getting in trouble with the accountants. They’re watching us pretty closely because of our audits. We need to make sure we’re pretty much by the book,” said Pucciarelli.

The mayor said the current juice in the existing generator “would keep everything going for six hours.”

Alderman John Ravnum said he apparently has a different take on the depreciation account.

“If we have emergencies to maintain our sewer and water, we could use these funds. Now, the problem is we would have to re-depreciate – with our generator, I don’t think it would be the 30 years,” said Ravnum, referring to the state mandate to depreciate all town equipment using a 30 year schedule.

The problem, Pucciarelli said, was the times in which the account has been used in the past to cover other emergency expenses and the town’s failure to ‘build the account.’

“As long as we don’t go willy-nilly, spending that money, but say ‘here’s this piece of equipment that needs to be updated and replaced.’ I think that the state would go along with that because they don’t want – say we have a power failure for 12 hours. They don’t want it going on, unless they want to take the risk,” said Ravnum.

“I think we need to exercise real caution. It’s been two years, in a row, that we’ve had a problem with the audits. We have to maintain a certain financial status with the state. Financial status takes priority over any excuse we might have,” said Pucciarelli.

Any perceived budget deficit that might arise from this transaction, Ravnum said, could be remedied with a simple transfer of funds in the appropriate accounts.

“The way I understand it, it’s still going to create a deficit. We’ve done this a couple years in a row,” said Pucciarelli.

Ravnum questioned why an amendment to the budget couldn’t be done.

“We should be allowed, because we’ve done it hundreds of times. Basically, take the money from the savings and put it into the checking. It should not affect the actual budget,” said Ravnum.

After a bit more discussion, Pucciarelli said he would delve deeper into the matter.

In other action, the BMA adopted ordinance 7-2017, on second reading. This ordinance amends previous ones setting restrictions for the serving of alcoholic beverages on premise.

The amendment to the town codes restricts the sale of alcoholic beverages to zones C-1, C-1A, C-2 and C-4 areas. All on premise consumption is restricted to zones C-1A, C-3 and C-4.

Ordinance 9-2017, adopted on first reading last week, essentially permits $3,000 to be transferred from one fund to another to be used as the town’s portion of a matching grant from the State of Tennessee Department of Environment and Conservation.

The county was awarded this grant with the understanding that the four municipalities, Tazewell, New Tazewell, Harrogate and Cumberland Gap, would split the matching costs totaling $12,000.

The $48,000 grant will develop a ten year Park and Recreation Comprehensive Master Plan, with a project cost not to exceed $60,000.

The mayor said the funds from this grant will be used for planning purposes, only. He said by contributing its portion to the match funds, the town will be placed on a list that will make it eligible for grants, down the road.

Ravnum was the lone ‘no’ vote. Alderman Teresa Fuson was absent from the meeting.

This ordinance will undergo a second reading before its final adoption.

Ordinance 10-2017 amends a previous one, showing current totals in the revenue and expense accounts for the Gap Volunteer Fire Department budget. This ordinance was adopted, on first reading. The second and final reading is expected to occur during the regular November meeting of the BMA.

It’s that time of year when the Gap gears up for the holiday season.

The popular Cumberland Mountain Music Show and Harvest Moon Festival are slated for Oct. 14. Mark your calendars for the annual Pumpkin Lights Festival, scheduled for Oct. 30-31.

The three best punkin’ carvers will win some impressive prizes. First place will earn $75 plus a one hour dance party at the Pineapple Tea Room.

The second place winner will receive $50 plus a $25 certificate for the Gap Creek Coffee House.

The third-best pumpkin slicer will win $25 plus a large pizza from Angelo’s in the Gap.