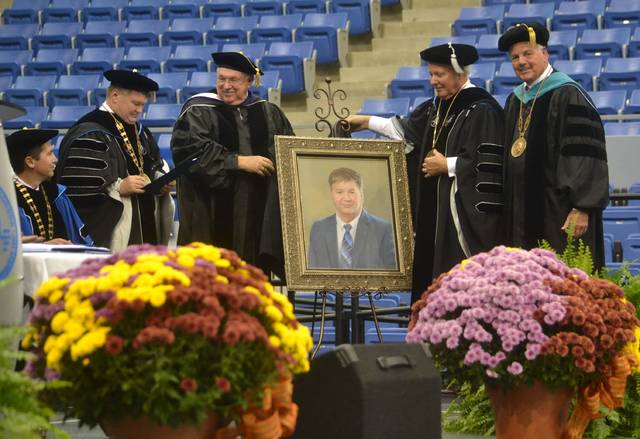 After four decades at Lincoln Memorial University in some capacity — first a student, then working in different areas — Dr. E. Clayton Hess was inaugurated as the institution’s 21st president last week.

The LMU Board of Trustees unanimously voted to appoint Hess president in November 2016, and he took office on July 1 of this year. The inaugural ceremony took place during the university’s annual homecoming weekend.

President Emeritus Dr. B. James Dawson delivered the keynote address, saying that Hess “is without a doubt the right person for the position.” He also challenged Hess to lead LMU to “new standards of excellence.”

The official presidential portrait by noted portrait artist Steve Moppart was unveiled, then Hess took to the podium to deliver his inaugural address. He talked about his time at LMU and how it has changed over the years.

“Abraham Lincoln knew the power of education…,” he said about the school’s namesake. “I am amazed at the growth and impact it has had … I know that it is the people who have worked here over the years that have helped make it what it is … It will take all of us to guide LMU through this period of remarkable growth.”

Hess shared highlights of his vision for LMU, which include expansion into new area of health care, strengthened relationships with the communities the university serves, expansion of access to what LMU has to offer and new academic teaching sites. He also wants to continue to focus on student success.

“We must never forget that our students are not only our business, but our responsibility,” he added. “They are the center of all we do.”

He started his career at LMU in 1981 shortly after graduating, and most recently served as provost and vice president for academic affairs.

Hess has guided LMU’s growth at all levels, chairing multiple committees responsible for substantive change proposals to initiate new extended learning sites offering associate, baccalaureate, post-baccalaureate, graduate and professional degree programs. Hess chaired the university’s successful Southern Association of Colleges and Schools Commission on Colleges (SACSCOC) reaffirmation of accreditation from 2006-2009. He chaired the committee responsible for degree level accreditation change from Level IV to V to pave the way for LMU-DeBusk College of Osteopathic Medicine, and from Level V to VI for subsequent professional programs including LMU Duncan School of Law, LMU-College of Veterinary Medicine, and doctoral programs in business, education and nursing.

Hess earned a Bachelor of Arts in history and two master’s degrees from LMU (one in counseling and the other in curriculum and instruction) and a Ph.D. in human services counseling from Walden University. Hess has four grown children and five grandchildren. He resides in LaFollette.

Crash at The Taz