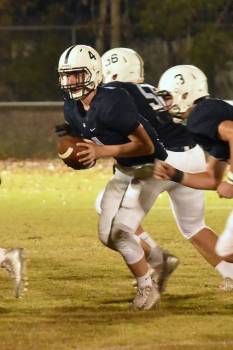 <p>Eli Stone had a career night with three TD passes.</p> 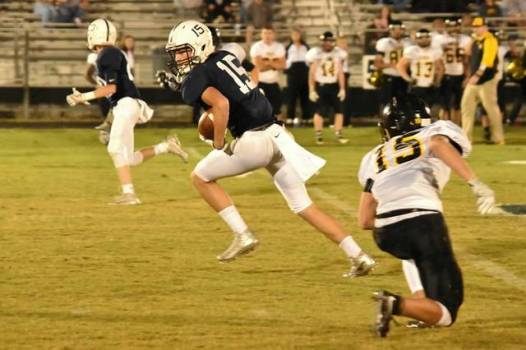 <p>Hadyn Hollin beats the defense for the first of his two TDs.</p> 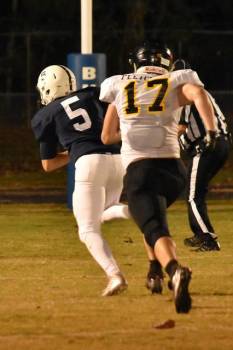 <p>Spencer Fejeran outruns the defense for a score.</p> 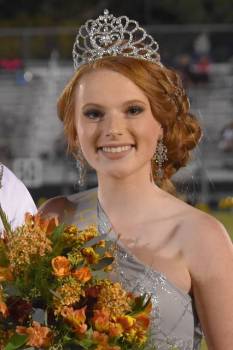 The Claiborne Bulldogs kept playoff hopes alive as they did what they needed to and defeated the Chuckey-Doak Black Knights 36-17 on a comfortable homecoming night. It wasn’t great at first for the home team as they allowed the visiting Knights to take the kickoff and score on the ensuing drive to lead 6-0.

On the Bulldogs first drive, they survived one fourth down but punted the ball away to the Knights. The Knights had to return the favor by punting the ball back but got a break when it hit a Bulldog player and was recovered by the visitors on the Bulldogs 44 yard line. The Knights turned the Bulldogs error into points at the 9:52 mark. After they completed the two point conversion the Knights led 14-0.

At this point in the game the Bulldogs fans knew something good needed to happen and it did when Eli Stone pitched the ball to Elijah Beason who took the option to throw and hit Hadyn Hollin for his first ever TD as a Bulldog. Grayson Howard kicked the PAT through the uprights and the Bulldogs were down 14-7. The game was now in quarter number two.

The Bulldogs defense was playing great and forced another punt which turned into points when Stone hit Spencer Fejeran for a 36 yard TD. The PAT was blocked but the Bulldogs were now within one point of tying the game.

The Bulldogs surprised everyone with an onside kick and it was Jeremiah Hunter who recovered. The Bulldogs drove the ball again but settled for a field goal by Howard to take their first lead with 2:05 remaining in the first half. The score was 16-14 at the half. During halftime it was announced that Sydney Marie Payne was named 2017 CHS homecoming queen.

The Black Knights hit a field goal during the first part of the third quarter to retake the lead 17-16. Minutes later, Stone and Hollin hooked up again this time for a 65 TD and the Bulldogs took back the lead. The two point conversion failed and the Bulldogs led 22-17. Laws later scored on an 18 yard run and Howard was good on the PAT to extend the lead out to 29-17. The Bulldogs defense was laying hits on the Knight runners and had taken all their momentum away.

Claiborne had one more score on the night and that was a Stone to Hunter Rosenbalm pass covering 55 yards. the PAT was good and the Bulldogs had taken the region win 36-17 which went a long way to securing a playoff berth.

They need to win one more region game or see the Knights lose again to be sure they make it. Lukas Neely led the defense with 11 recorded tackles, five solos and 12 assists. Matt Cupp, Alex Vanover and Gage Callebs all had over five recorded tackles as well.