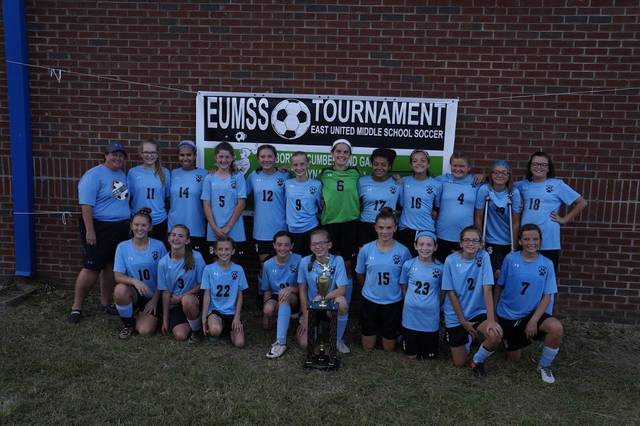 With all the regular season games played, the bracket was drawn for the third league tournament to begin. In addition to Claiborne and Cumberland Gap the league is also represented by Horace Maynard Middle School, Middlesboro Middle School, Campbell County and Oneida Middle School. Claiborne hosted the tournament October 7.

The day began with a match up between the No. 3 seed Horace Maynard and the No. 6 seed Middlesboro. Horace Maynard came out strong and dominated the field ending with a 7-0 victory and a place in the semifinal game against the No. 2 seed Oneida.

The second game saw No. 5 seed Claiborne facing No. 4 seed Campbell County. This game went back and forth as a defensive struggle until Campbell County was able to put two goals in in the first half. Claiborne fought back in the second half with a score by Emily Wine on a 30 yard shot from the midfield but Claiborne couldn’t close the gap and Campbell County went on the win 3-1. Their next opponent would be No. 1 seed Cumberland Gap.

The first semi-final game was No. 3 seed Horace Maynard vs No. 2 seed Oneida. Both teams were full of confidence but Oneida’s Aliyah Douglas and Caroline Keeton were an effective one-two punch that was able to put in four goals and secure the 4-0 victory and trip back to the championship game. After winning the tournament the first season and being eliminated early last season this team seemed on a mission.

The second semi-final game found a confident No. 1 seed and undefeated Cumberland Gap ready to take on the No. 4 seed Campbell County. The Gap put in four quick goals to start the game on some beautiful passing as they controlled the ball most of the half. Campbell County regrouped and came out again with a surge of energy but the Cumberland Gap defense led by Abby Welch was too strong and the Gap was able to close out an 8-0 victory.

The consolation game for third place pitted No. 4 Campbell County versus No. 3 Horace Maynard. Both teams having already played two games this day did leave the teams a little weary but the game was full of excitement. The first half went to the defense; it was a struggle in which neither team could find the net.

About midway through the second half Campbell County found the net to take a 1-0 lead. Not long after Horace Maynard’s Faith Kitts dribbled through the defense to score the equalizer. Just a few minutes later there was a collision in the box and Campbell County found itself at the penalty mark. The shot went wide of the goal and an Overtime PK battle was on everyone’s mind. Hayllynn Willis took matters into her own hands and made a nice drive down the left side of the field and was able to put one in the back of the net. That gave Campbell County the 2-1 upset and third place finish.

The much-anticipated championship game was set with No. 1 seed Cumberland Gap trying to complete their perfect season against a very strong No. 2 seed Oneida. The Gap came out strong and Brianna Goins was able to land two goals along with Taylor Pressnell’s one to start the Gap off right, up 3-0. Play slowed and the defensive battle took over.

The Gap was able to add one goal to their total but not without Caroline Keeton breaking free to put in a goal of her own. The halftime score of 4-1 would not go unchanged.

A hard fought second half saw both teams buckle down the defense and the Panthers were able to complete their undefeated season and win the championship by a final score of 4-1.