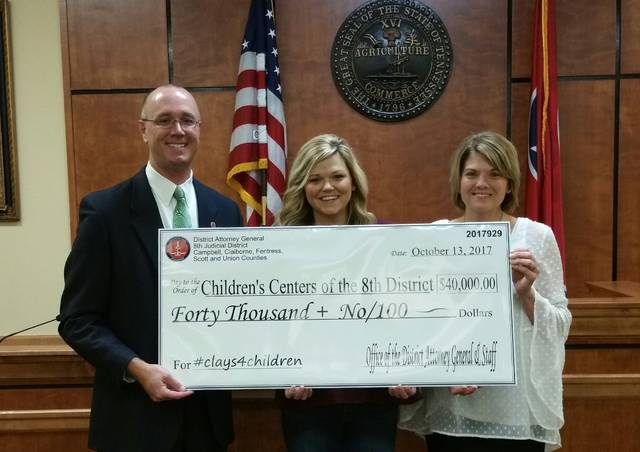 Children’s centers in the 8th Judicial District, which includes Claiborne County, benefited recently from a fundraiser hosted by the District Attorney General’s Office.

According to a news release from the office of 8th Judicial District Attorney Jared Effler, $40,000 was raised.

The children’s centers of the 8th Judicial District serve literally hundreds of children each year, and work closely with local law enforcement and the District Attorney Generals’ Office.

“Cooperation and collaboration between all agencies is key in effectively prosecuting crimes against children. The children’s centers of the 8th Judicial District are an essential part of the team, and we are most proud to stand with them and support them,” said Effler. “From medical examinations, forensic interviews, counseling and therapy, their services help to ensure justice is served upon the perpetrator of crimes against children and help victims through their counseling services.”

In addition to Claiborne, the 8th Judicial District is comprised of Campbell, Fentress, Scott and Union counties.

Effler developed the idea of a sporting clays tournament last year in an effort to find a unique fundraising opportunity that could bring people together from across the district and benefit the children’s centers.

“We continue to be humbled by the support we receive from private individuals, law enforcement, local businesses and corporations for this great event,” Effler said. “Like last year, everyone enjoyed themselves, and we raised money for a very worthy cause.”