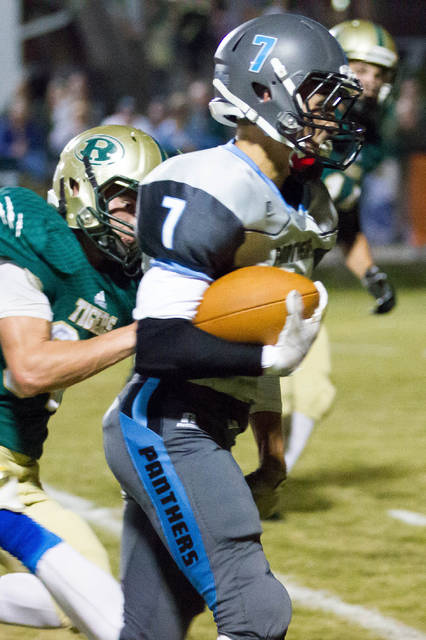 Jayson Upton breaks loose for a big gain during the Rockwood game.

The Cumberland Gap Panthers, fresh off a streak-breaking win against rival Claiborne, had the task of shaking off the big win and traveling to Rockwood to battle a good Tigers team. The Tigers took little time in scoring and placed the Panthers in a come from behind mode early.

They responded at the 4:57 mark in the first when Gage Ellison scored on a fourth and four. Nick Neverstitch nailed the point after and the score was tied at seven. The Tigers returned the favor and broke the morale of the visitors until Matt Muggridge and Jayson Upton spear-headed the second touchdown of the night for the Panthers. The PAT this time was missed and at the half the Panthers were behind 28-13.

That represented the Panthers final score of the game and Rockwood kept placing points on the board and held a 41-13 advantage when the clock ticked down to all zeros. Even though it was a disappointing loss for the Panthers they will still have a chance to extend their season November 3 when they travel to Sullivan North for round one of the playoffs. Their overall record ended up at 7-3 but the Panthers hope to add a few more wins before they place the pads in storage until 2018.

The New Tazewell Christian Fellowship Softball League featured seven teams this season and it all came to an end Oct.... read more